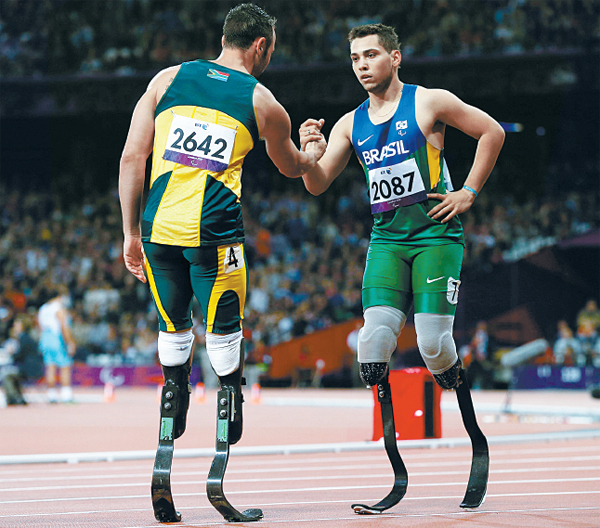 Brazil’s Alan Oliveira, right, is congratulated by South Africa’s Oscar Pistorius after winning the men’s 200-meter T44 classification at the Olympic Stadium during the London 2012 Paralympic Games on Sunday. [REUTERS/YONHAP]


LONDON - South Africa’s Oscar Pistorius has re-opened the debate about whether artificial blades give amputee runners an unfair advantage after sensationally losing his T44 200-meter title at the London Paralympics.

The 25-year-old “Blade Runner,” so-called because he runs on carbon fiber prostheses, was beaten into silver by Brazil’s Alan Oliveira on Sunday evening, stunning the 80,000-strong crowd at the Olympic Stadium into silence.

He then hit out at the International Paralympic Committee, claiming that he was at a disadvantage in the race over artificial leg length.

“The guys’ legs are unbelievably long. Not taking away from Alan’s performance, he’s a great athlete.

“But these guys are a lot taller and you can’t compete with the stride length.

“You saw how far he came back [down the home straight]. We aren’t racing a fair race. I gave it my best.

“The IPC have their regulations. The regulations allow that athletes can make themselves unbelievably high. We’ve tried to address the issue with them in the weeks up to this and it’s just been falling on deaf ears.”

Pistorius, who had been seeking to defend all three T44 sprint titles he won in 2008, said U.S. bronze medallist Blake Leeper’s knee height, for example, was “like four inches higher than it should be.”

“The guys are just running ridiculous times and they’re able to do so,” he added.

“I don’t know how you can come back, watching the replay, from eight meters behind on the 100 to win. It’s absolutely ridiculous.”

Pistorius lost by seven-hundredths of a second, as Oliveira stormed from behind to win in 21.45 seconds.

His complaint comes amid lingering questions about whether carbon fiber blades give amputee runners an advantage and follows his successful challenge of a ruling that his own blades were unfair to non-disabled athletes.

Some scientists claimed that his J-shaped “Cheetah” blades meant he used less energy to run at the same speed as a non-disabled opponent but others argued that was cancelled out by his slower start out of the blocks and acceleration.

Oliveira, a double-amputee through congenital illness, said he was disappointed by the criticisms and rejected Pistorius’ claims.

“It’s not just about the protheses, there is training behind [my performance]. I get upset to hear this kind of thing. I’m inside the rules,” he told reporters.

His score in the final, 705.5, was the highest ever recorded at the Paralympic Games. It was Korea’s second gold medal in shooting at the London Paralympics, after Park Sea-kyun, won the men’s 10-meter air pistol finals on Thursday.

On Sunday, Korea also won two bronzes in table tennis and one bronze in swimming.