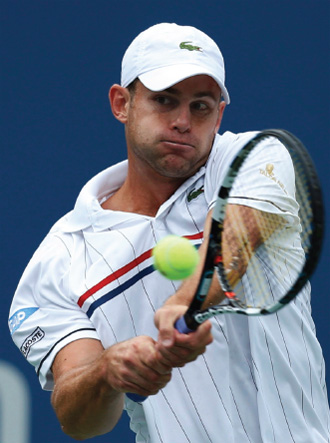 Andy Roddick of the United States returns a shot to Fabio Fognini of Italy during their men’s singles match at the U.S. Open tennis tournament in New York, Sunday. [REUTERS/YONHAP]

NEW YORK - Andy Roddick said New York’s passionate crowd is an invaluable weapon for him as he attempts to win the U.S. Open in a fairytale end to his career.

The 30-year-old Roddick had deafening support against Fognini, kindling memories of Jimmy Connors’ run to the 1991 semifinals at the age of 39.

Roddick vowed to continue tapping into the raucous cheering against the seventh-seeded del Potro.

“I’d be an idiot not to use the crowd right now,” Roddick said. “It’s a huge advantage. Each match is almost like it’s another memory. I’m certainly going to use them.”

Roddick was once coached by Connors, who turned 60 on Sunday, but said one of the game’s great showmen had never spoken to him about his stampede through the draw in 1991.

“Jimmy, unlike a lot of people who have had as much success as he’s had, Jimmy doesn’t like to talk about Jimmy in the past,” Roddick said. “He doesn’t reference himself at every turn.

“You would have to ask him about it. You know, he certainly didn’t equate everything that happened on a tennis court back to something that he did that was great.”

Del Potro expected the respect of the crowd if not the numbers of people on his side.

“I know this is special, this day for him, but I’m doing my job,” del Potro said. “The match is going to be very tough but if I play at a high level, it will be tough for both players.

“Big atmosphere. The crowd loves Andy here and they have respect for me so it will be a fantastic show. Argentinian fans come to watch me.

“I don’t know if all the crowd will be with him. I will like to win and I will try to do my best tennis.”

Novak Djokovic continued his stroll through the U.S. Open draw on Sunday with a workmanlike 6-3, 6-2, 6-2 victory over Frenchman Julien Benneteau to reach the fourth round.

In women’s events, third seed Maria Sharapova survived a scare against Russian compatriot Nadia Petrova to reach the quarterfinals, having trailed 2-0 in the deciding set before a 73-minute rain delay allowed her to regroup and march to a 6-1, 4-6, 6-4 victory.

Defending champion Samantha Stosur ended the giant-killing run of 18-year-old Briton Laura Robson with a hard-fought 6-4, 6-4 win in the fourth round of the U.S. Open on Sunday.

The Australian came from a break down to win the first set and held off a late fight-back by Robson in the second to advance to the last eight after one hour, 38 minutes.

Robson had beaten Kim Clijsters and Li Na to make the fourth round but Stosur was the more consistent as she took the first set and led 5-2 in the second. The Briton battled back, saving eight match points in the process, but Stosur broke her again to set up a likely clash with top seed Victoria Azarenka.