After baring its fangs, Kepco may ditch legal threat

After baring its fangs, Kepco may ditch legal threat 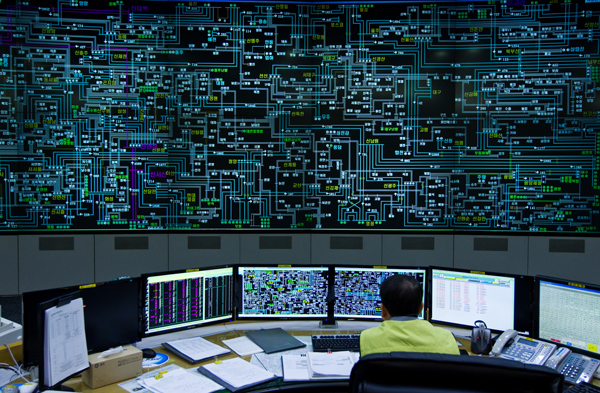 A worker at the Korea Power Exchange checks on changes in the nation’s power consumption. The exchange may be sued by its mother company, Korea Electric Power Corporation (Kepco), which insists that KPX sold it electricity at an unfairly high price. [JoongAng Ilbo]


Korea Electric Power Corporation (Kepco) is blaming its subsidiaries for part of its chronic operating losses dating back to 2008, claiming that its poor results stem from them selling it electricity at unfairly high prices.

To redress past wrongs, it vowed last Wednesday to sue its subsidiary Korea Power Exchange (KPX) and Power Cost Evaluation Committee seeking total damages worth 4.4 trillion won ($3.88 billion), or the amount it believes it was overcharged.

Kepco buys electricity from KPX and distributes it to consumers, while KPX monitors the electric power supply from the country’s six power generators, including Korea Hydro and Nuclear Power, and Korea Southern Power Corporation.

However, Kepco said it is now considering withdrawing its threat of legal action after the Ministry of Knowledge Economy, which administrates the power companies, issued a statement on Saturday.

“Kepco should not proceed with legal action, otherwise the ministry will intervene,” it said. “If it demands KPX lower its bills, other private electricity-generating companies will also be negatively affected.”

In another statement, KPX said that “blaming other power companies for its loss is merely a dereliction of duty on the part of Kepco.”

The dispute between Kepco and KPX, which operated under the same roof prior to 2001, has helped build support for the argument that the two should be reunited to avoid future tiffs. Kang Chang-il, chairman of the Knowledge Economy Committee at the 19th National Assembly, has repeatedly called for KPX and Kepco to be merged.

Kepco blames KPX and the Power Cost Evaluation Committee for its yearly loss, claiming they calculated the electricity price in a way that suited their own bottom lines at its expense. It also threatened to not pay them the full balance of what it owes this year.

Kepco buys electricity from KPX at the same price regardless of whether it is generated from coal, nuclear power or liquefied natural gas (LNG). Electricity generated from nuclear power is the cheapest at 9 won per kilowatt, while that generated from LNG costs 149 won, according to Kepco. To determine a fair purchasing price, Kepco, KPX and the committee set a coefficient number every quarter. 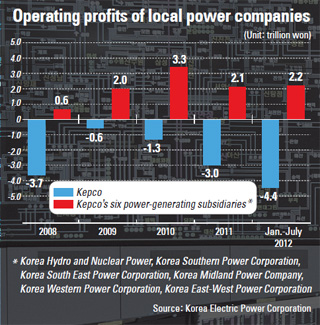 But Kepco claims the two organizations chose a number that was unfairly high. It added that it could have requested a discount if it had been regularly informed of the difference between estimated demand and actual consumption. However, it said this was not the case.

Because it was grossly overcharged, “Kepco continues to post losses, while its subsidiaries record profits,” Kepco said in a release.

Its accumulated losses since 2008 total 13 trillion won, while the electricity-producing subsidiaries earned 10 trillion won in profit over the same period, the company said.

To cut its losses this year, Kepco is considering calling for another price hike after its previous attempt to shift some of its operating deficit onto consumers’ shoulders was shot down by the ministry.

However, Knowledge Minister Hong Suk-woo wrote an e-mail to reporters just last week informing them that there would be no such revision in 2012.

“I warned businesses that there could be a 50 percent hike further down the road .?.?. to encourage them to use power more efficiently, but there will be no change this year,” he wrote.

Kepco claims it needs to raise its fees by 16.8 percent to match its operating deficit, and appears to still be sulking after the government approved a mere 4.9 percent rise last month.

Meanwhile, the company is under continued attack from its shareholders, who last year sued its former chairman Kim Ssang-su for dereliction of duty over the losses.

Kepco has been feeling the heat since a nationwide power blackout on Sept. 15 left parts of the company in darkness, trapping people in lifts and causing factories to post production losses.