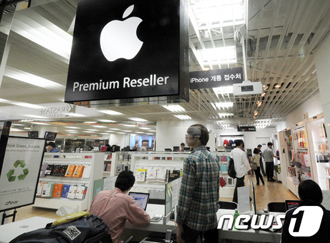 A domestic sales ban on smartphones and tablet PCs by Apple and Samsung Electronics for infringing on each other’s patents may take effect from this week, after the Seoul Central District Court ruled late last month that Apple violated two patents while its chief rival violated one.

The court said it notified both companies on Friday of the ban and related damages, with Apple having to pay $35,300 and Samsung being ordered to cough up $22,000.

Law enforcement officers will keep tabs on the headquarters, shops and after-sales service centers of Samsung Electronics and Apple to make sure they implement the ban in accordance with the verdict, the court said.

The court has imposed a sales ban on Apple’s iPhone 3GS, iPhone 4, iPad 1 and 2 after a jury found that they breached two telecommunications-related patents owned by Samsung. Refurbished iPhones are also included in the ban, and the company is prohibited from offering after-sales service on all of the aforementioned products.

According to Apple’s after-sales service policy, any iPhone or iPad that malfunctions within one month of purchase through no fault of the consumer can be exchanged for a new one. Those that malfunction within one year can either be replaced with a refurbished product or repaired for free.

The court also banned Samsung’s Galaxy S and S2 smartphones for infringing on Apple’s bounce-back touchscreen feature that takes effect when the user scrolls beyond the edge of a page. The Seoul court’s ruling does not include Apple’s latest iPhone 4S, its newest iPad, or Samsung’s latest products including its Galaxy S3 flagship smartphone, all of which were released after the lawsuits were filed.

The two companies have sued each other on four continents since April, accusing each other of copying products, design and technology as they battle for dominance of a global smartphone market worth an estimated $219 billion.