Korea is the world’s seventh-biggest exporter but ranks just 21st in terms of its logistics environment, and the finger of blame is being pointed at large conglomerates for effectively crippling the industry’s competitiveness.

Chaebol subsidiaries that deal with so-called second-party logistics (2PL) - that is, those companies that transport products among the group and its affiliates - account for the lion’s share of the nation’s logistics’ demand.

Research organizations like Hyundai Research Institute claim they charge high prices, squeeze out smaller rivals such as third-party logistics (3PL) service providers, and eliminate competition in a way that hampers the development of globally competitive players in the country.

Logistics costs as a percentage of GDP stood at 10.8 percent in 2009, according to a report by the think tank last month, which is higher than 7.6 percent in the U.S. or 8.6 percent in Japan.

“[They] are getting all the work from the companies that fall under the same umbrella, without any competition, so there is no need for them to lower their costs,” the report said.

According to another report last year by the Fair Trade Commission, which analyzed 47 local conglomerates, business deals between subsidiaries from the same group totaled 27 trillion won ($23.8 billion) in 2010.

It said 2PL companies get 83 percent of their total sales from other affiliates within the same group on average. It is still over 80 percent this year, according to recent data from the Financial Supervisory Service’s Data Analysis, Retrieval and Transfer System.

“I think most groups want to have their own logistics companies because it is easy to turn a profit and there isn’t much risk or competition,” said Park Chan-seok, the head of Mirae Logistics Consulting.

Hyundai Glovis, the logistics arm of Hyundai Motor Group, marked sales of 4.1 trillion last year, up almost 10-fold from 2003. Over the same period, Hanjin, the nation’s No. 1 logistics service provider, only saw its sales double.

“Big manufacturers in the U.S. or Europe do not have their own logistic companies,” Park said. “Conglomerates generate the most demand for this service, and in Korea they tend to feed that themselves, within their own umbrella.

“This is why we haven’t seen a Korean equivalent of DHL take shape internationally.”

He said the companies rely on commission fees after outsourcing their works to other logistics firms, implying that they lack a profitable business model and would not prosper with the support of their respective groups.

“In lieu of setting up solid logistics networks or facilities, they just outsource projects to others and rake in the fees,” Park said. “And the logistics affiliates just provide specialized services for their mother company, not for the nation as a whole.”

Nonetheless, demand for 3PL firms has been growing steadily.

Last year, the percentage of local companies that outsource their logistics work stood at 56 percent, up 3.9 percent from 2010. Over 66 percent of companies surveyed by the Korea International Trade Association (KITA) last year said they have seen prices edge down.

But 96 percent of the 3PL providers are run by companies that have fewer than 10 employees, according to the report.

Industry experts say they need more government support to grow, while other companies should be provided with incentives to seek out their services. 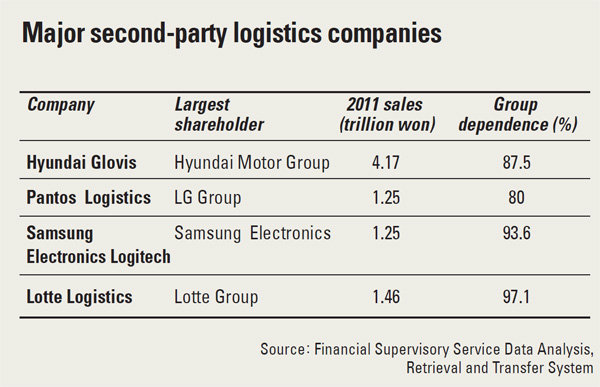 According to the KITA survey, 33.2 percent of companies called for more tax cuts from the government, while 29.8 percent demanded that more logistics infrastructure be built.

The Ministry of Land, Transport and Maritime Affairs established a certification system in 2006 to give them a shot in the arm, but pundits say this is geared to help 2PL companies.

In June, the ministry selected six logistics companies to foster as global players, and only one was not affiliated with a conglomerate.

In formulating its criteria, the ministry, together with the Korea Transport Institute, said that each of the candidate’s overseas sales must make up at least 10 percent of its total sales, and that they should have at least two overseas branches in two continents.

But for many small companies, these criteria prevented them from submitting an application.

“The rise of second-party logistics firms should be contained by stricter policies,” Park said.