Even Apple’s fans think it's going too far in court

Even Apple’s fans think it's going too far in court 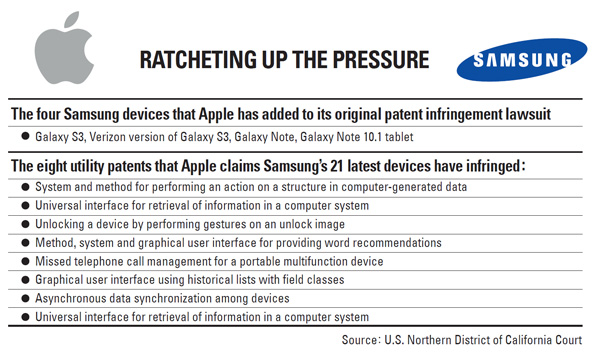 Apple’s piling on of more claims of copycat devices by Samsung has sparked a lot of comment that it is going too far in protecting its intellectual property - and the ramifications might be bad for both consumers and for Apple itself.

On Friday, Apple accused four more Samsung Electronics products of being copies of its devices, including the latest Samsung smartphone, the Galaxy S3. It made a filing in the same U.S. court that ruled against Samsung in a patent trial last month, hitting the Korean mega-company with a $1.05 billion fine.

“The complacency engendered by legal protection will kill it [Apple],” wrote Tim Worstall, a fellow at the Adam Smith Institute in London, in a contribution to Forbes Magazine Aug. 31. Worstall repeats a claim from the tech community that “Apple’s win over Samsung is the beginning of the end for the company.”

A columnist for the Washington Post on Aug. 31 said he hoped Apple loses Samsung’s appeal of the San Jose, California court verdict on Aug. 25 because he is worried about the future of innovation at Apple.

“Another Apple victory will escalate the patent wars and cause more innovative startups to get trampled while tech-industry titans battle each other,” he writes. “Another patent victory could also cause Apple to become complacent - just as Microsoft was at the height of its Windows monopoly. Innovation requires a thriving ecosystem - one in which companies build on each other’s ideas and where they are forced to continually reinvent themselves.”

A fake Samsung ad on the Internet, whose creator is unknown, mocks Apple for its litigiousness. “Apple says that Samsung products are substantially the same as theirs,” it says, “.?.?. with a bigger screen, better performance, more features, more free apps and a lower price.”

The Friday filing was an amendment of a case Apple initially filed in February, the second time the American tech behemoth has sued Samsung in the United States.

Newly added Samsung products are those released since August 2011, including the Galaxy S3, the Verizon version of the Galaxy S3 - which debuted in the United States in June - as well as the Galaxy Note and Galaxy Note 10.1 tablet.

That has brought the tally of accused gadgets to 21. The trial is currently scheduled for March 2014.

“The addition of the S3 is a formality,” said Florian Muller, an intellectual property expert, on his FOSS Patents blog. “It was always clear .?.?. the S3 was going to be an issue in this lawsuit since it was launched not long after the filing of the complaint, making a timely amendment of the list of accused products an option that Apple was definitely going to choose.”

The February complaint has already resulted in a preliminary injunction against the Galaxy Nexus smartphone on potential infringement of the unified search patent in June but Samsung was granted a stay pending an appeal and the unit remains on sale.

Apple has sued Samsung over a different set of patents in the second California filing on the user interface, not the design.

Analysts in Korea predict the repercussions of Apple going after Galaxy S3 will not be as huge.

“It took one year and four months for a verdict to come out since the point of Apple’s first court filing, and the verdict on a possible sales ban on the Galaxy S2 will be made in December, four more months later,” said Hwang Min-sung, an analyst with Hana Daetoo Securities.

Meanwhile, a survey of 606 adults nationwide last week by Gallup Korea showed yesterday that 64 percent of them think the U.S. jury’s ruling in favor of Apple was partial, while only 15 percent considered the verdict fair. The remaining 21 percent said they had no opinion.

When asked which smartphone brand they would choose in the future, 57 percent opted for Samsung while only 12 percent named Apple.