Is having a baby cost-prohibitive?

Is having a baby cost-prohibitive?

Korea, which suffers from one of the lowest birth rates in the world, is an expensive place to have a baby, recent studies find.

The high cost of prenatal and postpartum care and difficulties in fertilization, paired with a decline in clinics and doctors, also contribute to the low birth rate in Korea.

The JoongAng Ilbo and the Planned Population Federation of Korea conducted an investigation into the reason behind the low birthrate here and found that it costs far more to give birth in Korea than in other neighboring countries such as Japan.

A 34-year-old woman surnamed Kim from Yongsan District, central Seoul, in her 25th week of pregnancy has spent 1.36 million won ($1,198) on her checkups. 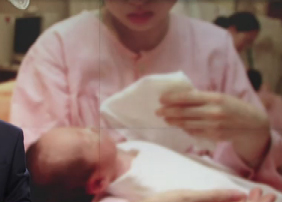 Since she got pregnant in April, she has had seven checkups and received various examinations including ultrasounds and checking the soundness of the baby, whether it has any problems or deformities.

The ultrasound examination was the cheapest of the bunch at 33,000 won per examination but the amniocentesis, or amniotic fluid test, which tests any chromosomal abnormalities, costs 840,000 won.

She estimates that by the time she gives birth in December, she will have spent 6.71 million won on prenatal care, of which the government supports just 500,000 won.

This includes 14-15 examinations until birth. If she has a Caesarean section, there will cost an additional 1.5 million won.

And that’s just the beginning. After giving birth, some 3.6 million won will be spent for two weeks at a postpartum care center.

In contrast, in Japan, while the cost of childbirth is even higher, the government bears a higher burden of the cost. For instance, for Yasuo Hojo, 30, who will give birth next month, an ultrasound costs around 9,000 yen, or 130,000 won, four times what it costs Kim.

Hojo expects to spend a total of 10.47 million won on childbirth, but the government will bear 7.11 million won of the burden.

The biggest difference in the cost between the two countries is in the cost of postpartum care.

In Japan, after they give birth, mothers receive postpartum care at their homes through helpers supported almost entirely by the government.

On the other hand, there has been a boom in the number of postpartum care centers, or sanhujoriwon, which provide care rather unique to Korea for mothers immediately after giving birth.

According to the Ministry of Health and Welfare statistics, there are 508 postpartum care centers as of April 2012, up from 294 in 2006.

This is paradoxically a higher number than the number of obstetrics and gynecology clinics which deliver babies, which have been on the decline over the years and now number at 484.

She received care at facilities rivaling that of a five-star hotel, with massages to break down fat, full health checkups and skin treatments.

Among other things, the clinics offer the amenities of an upscale, luxury jjimjilbang, or public bathhouse. Babies are clothed in natural, organic fabric.

According to the Health Ministry’s study in 2009 into postpartum care, on average 1.86 million won was spent on these postpartum care centers, which amounts to 132,000 won per day.

For other parents, getting pregnant is a difficult feat.

A 38-year-old surnamed Park, during five years of marriage, received artificial insemination three times and in vitro fertilization twice before finally getting pregnant.

Considering that her husband was 40 years old, and the challenges involved in late-age pregnancies, she quit working to focus on her pregnancy. She received a diagnosis that there was a cyst on her uterus, but because she was afraid that surgery might interfere with her fertility treatment, she didn’t remove the cyst.

“Of course it was straining on the body, and it also cost a lot as well,” said Park.

According to the service, more than 3,000 women suffer from repeated miscarriages each year.

In one in three cases, the cause of infertility is unknown, according to findings from the Korea Institute for Health and Social Affairs in 2009. Treatment for infertility takes more than one and a half years and costs on average above 3 million won, the institute found. Even despite the investment of time and money, more than half fail in fertilization.

“There are many couples that hesitate to seek treatment for infertility because of the high costs,” said Jung Da-jeong, an obstetrician at the Gangseo Miz Medi Hospital in western Seoul. “Instead of the government limiting support for up to four sessions, they should designate an amount per patient so that they can use it as they please.”