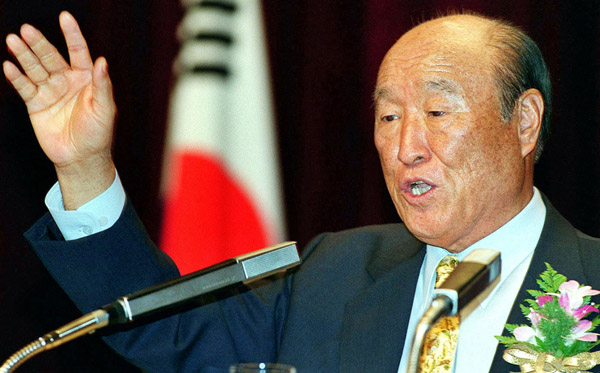 Moon Sun-myung, founder of the Unification Church, one of the largest religious cults in the United States and a business and media mogul, died yesterday at a hospital in Gapyeong, Gyeonggi. He was 92. [YONHAP]


Moon Sun-myung, the founder of the Unification Church and a business mogul, died yesterday in a hospital in Gapyeong, Gyeonggi, at the age of 92.

The religious leader’s hospitalization last month spurred followers to hold prayer vigils and fasting for their “True Father’s” health amid an onslaught of speculation regarding the future leadership of the Unification Church, a religious movement established in 1954, and its affiliated multibillion dollar business empire.

Moon’s second wife Han Hak-ja, 68, and many children were present when Moon passed away yesterday at 1:54 a.m. at the Cheongshim International Medical Center, a church-affiliated hospital, due to complications from pneumonia.

Moon and Han had 13 children, seven sons and six daughters, many of whom were U.S. educated. His first and second sons passed away, but his oldest surviving son, Hyun-jin, 43, will not succeed his father.

Instead, his seventh and youngest son, 33-year-old Rev. Moon Hyung-jin, international president of the Unification Church, has been named as Moon’s successor and has led the church as “spiritual leader” since 2008.

Kook-jin, 42, Moon’s fourth son, is chairman of Tongil Group, founded in 1963 by his father to manage church assets and the main part of his business empire, which expanded over the decades to industries ranging from pharmaceuticals to construction.

A Unification Church spokesman said that since Moon Hyung-jin has been acting as international president for years, strife was unlikely among Moon’s children over the businesses.

But tension within the Moon family has occurred in the past. Last May, the eldest surviving son Hyun-jin filed a lawsuit against his mother for allegedly sending his company’s funds to her missionary foundation without his consent. The court ordered the money to be returned.

Followers of the Unification Church, including leaders of the churches’ divisions overseas, expressed their grief yesterday.

“The Reverend Moon Sun-myung, revered by millions as the Messiah and True Parent, who was born in Korea but who lived more than 40 years in America, and who is loved by families of peace the world over, has ascended,” stated Rev. Joshua Cotter, vice president of the U.S. branch of the Unification Church yesterday via their official Web site.

The self-proclaimed messiah has investments in automobiles and construction projects in North Korea.

After North Korean leader Kim Jong-il’s death last December, Moon sent his son Hyung-jin to the funeral in Pyongyang to pay his respects. Similar respects were paid by Moon when Kim Il Sung died in 1994, leading to speculation that North Korea’s Kim Jong-un will likely return the gesture this time around.

Moon was initially admitted Aug. 14 to the intensive care unit at Seoul St. Mary’s Hospital in Seocho District, southern Seoul, with symptoms of cold and pneumonia. The Unification Church initially indicated there was a “50-50 chance of recovery,” but Moon was transferred to Cheongshim last Friday after doctors decided that his condition was “not treatable with current medicine.”

Moon, who survived a helicopter crash in Korea in 2008, was active in church events and gave sermons until July.

His body was moved to the church-affiliated Cheongjeong Palace, located in the mountains 1.5 kilometers (0.9 miles) from Cheongshim Peace World Center in Gapyeong, Gyeonggi, where funeral preparations are being made.

The iron gates to the building were barred, preventing entry yesterday.

The funeral is scheduled to take place on Sept. 15 at the Cheongshim Peace World Center after a 13-day mourning period.

The burial will be at Mount Cheonseung in Gyeonggi, the church said yesterday. A memorial altar will be set up for the religious leader on Thursday.