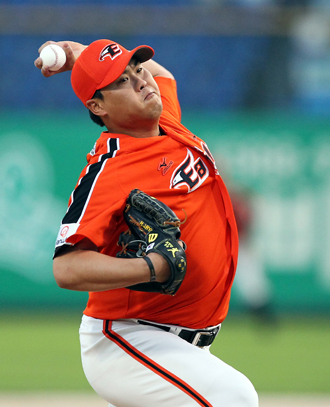 After coach Han Dae-hwa resigned last week, waving the white flag towards the end of one of the ball club’s worst seasons ever, the Hanwha Eagles are likely going to have to deal with another loss. Ace Ryu Hyun-jin recently announced his intent to play in Major League Baseball next season.

The Daejeon-based franchise has the right to hold on to Ryu until 2014, but the Eagles seems to be coping with the 25-year-old pitcher’s announcement, an official of the Eagles told Ilgan Sports, an affiliate of the JoongAng Ilbo, yesterday.

“There is not an environment at this club that would forbid him from leaving and going to the Majors,” the official said. “It appears that there are more people here who think it is the right move to release him than those who don’t.”

Ryu, already considered one of the most talented pitchers in Korean baseball history, has long been seen as an MLB prospect. He is finishing up his seventh season in the Korea Baseball Organization, certain to end next month given the team’s last-place standing.

Under KBO rules, a player is entitled to move to an overseas league after finishing seven seasons in the domestic league. But Ryu still has time left on his contract and needs consent from the club to move to the Majors.

The two-time winner of the KBO’s Golden Glove best pitching award, will become a free agent in 2014, which would allow him to move to any team at home or abroad without the Eagles’ approval.

But the Eagles may let the pitcher leave the nest early. On Sunday, the pitcher broke his silence on the issue.

The Eagles, trailing the first place Samsung Lions by 22 games and closing in on its third last-place finish in four years, are under the acting management of assistant coach Han Yong-deok after coach Han resigned.

The club is known to be searching for a top coach to turn the club around for the next season. Some expected the club to keep a tight grip on one of the league’s best pitchers.

But public pressure is already mounting on the ball club to let Ryu go to the Majors. No Korean has landed a spot in the Majors after playing in the KBO, and there is currently only one player, Choo Shin-soo, playing in MLB.

Advocates of the move point to economic benefits for the ball club as well. For a player to pursue a Major League career after seven years in the KBO, he must go through a posting system, under which the team bidding with the highest amount among the 30 MLB teams is given the exclusive right to the player.

This gives the KBO club - in this case the Eagles - higher returns than if Ryu left during free agency.

According to those close with Ryu, the pitcher wants to play in the Majors even if he is not given a huge sum of money or he is picked up by a small-market team. He thinks it will be more meaningful for his career to attempt a new challenge in a bigger league than wait for a deal in the KBO, they said.

Ryu, with 95 victories and 51 losses, boasts a career earned-run-average of 2.85. His winning percentage, 0.651, is already the second highest among all KBO pitchers, current or retired, after Sun Dong-yul’s 0.785.

Since his professional debut in 2006, Ryu has had wins in the double-digits every season including 18 in 2006 and 16 in 2010, both years in which he received the Golden Glove award.

MLB analysts said the left-hander will be attractive in the Majors as there are a few of them available in the free agency market. A Korean agent working with MLB told SBS that he could get an offer as high as Japanese pitcher Hisashi Iwakuma of the Oakland Athletics.