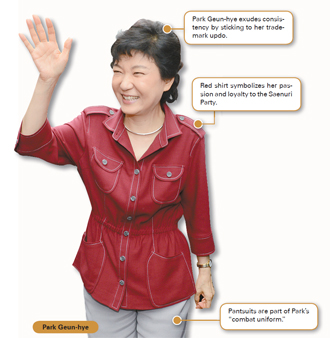 At a campaign appearance in Busan Sports Complex last month, Saenuri Party presidential candidate Park Geun-hye wore a bright red top and gray pants. While in the past Park was usually seen wearing muted tones, white and conservative suits, after the ruling party designated red as its official color, these days the presidential hopeful often can be seen in striking red shirts. Some have even started calling them her “combat uniform.”

“Her tidy updo represents consistency while white stands for purity and red for passion and her loyalty to the Saenuri Party.”

For most of her public life, Park has maintained this neat up-style, which is reminiscent of the hairdo of her mother and former first lady, Yuk Young-soo. For a brief period in 2007, Park changed her hairstyle to a bob, only to go back to her usual updo five months later after advisers told her the new style didn’t fit her public image. At the moment, Park does her own hair and makeup and consults with people in her camp on clothes before major events.

In an age when major political debates and appearances are often viewed, not heard, the clothes and overall appearance of a politician often say just as much about the person as what he or she actually says. Rick Santorum’s sweater vests, for example, played a role in getting him public attention, because the former Republican presidential hopeful deviated from the traditional dark suit-white shirt combination.

In fact, some of the most memorable political events of the past few decades are closely connected to fashion. When U.S. President Barack Obama appears in the “I Believe” TV ads in a white shirt with no tie and sleeves rolled up, saying, “I believe in fighting for the middle class,” the image would look quite different if he were to have worn a dark suit with a stiff tie.

For former U.S. Secretary of State Madeleine Albright, it was her famous brooches that many times did the speaking for her. She has said she wore a balloon brooch whenever she thought negotiations would go well. When she visited Korea in June 2000, she wore a sun-shaped pin to show then-President Kim Dae-jung she supported the Sunshine Policy toward North Korea. After Saddam Hussein called her a serpent during her tenure as U.S. ambassador to the United Nations, she famously wore a snake pin when dealing with Iraq. 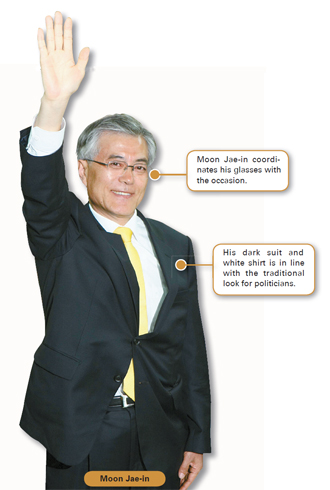 In the Korean presidential race, Moon Jae-in, a senior adviser of the main opposition Democratic United Party, is perhaps the candidate who sports the most traditional “politician look.” On the same day as Park’s appearance in Busan, Moon took part in a speech session with other presidential candidates wearing a dark suit and white shirt. However, at the appearance Moon’s usual large gold-framed glasses were nowhere to be seen. In their place, were smaller round- framed glasses, which the candidate started wearing in June.

The gold-framed glasses, like Park’s updo, had been Moon’s trademark since his days in the Blue House as a confidant to the late President Roh Moo-hyun. But in June, when he made an appearance at Kyunghee University, Moon wore dark brown horn-rimmed glasses that are popular among the younger generation. Last month, he was seen with a pair of black horn-rimmed glasses during an outing to visit the Goyang Wonders baseball team in Gyeonggi. Another new pair that were round, black and semi-rimless, which the main opposition party politician picked out with his wife, Kim Jeong-suk, this June, shows his softer, younger side, according to fashion experts.

“With this traditional foundation of the suit, his glasses play an important part in creating an image and he has been smart in changing things up in that department and going for more youthful, stylish glasses frames recently before the December presidential election.”

Glasses also were an issue for former Prime Minister Lee Hoi-chang, in which he was advised by members of his camp to change his rimless glasses to round, horn-rimmed ones for a more approachable look. According to his former colleagues, when he was given that advice during his bids for the presidency in 2002 and 2007, Lee’s response was a firm no, saying he didn’t want to change his image. 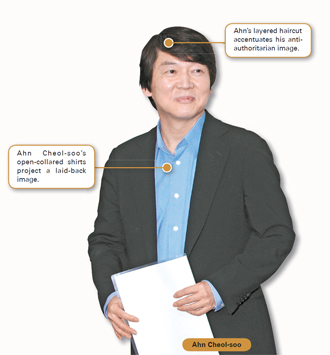 A possible dark horse in this year’s election, software mogul-turned-professor and potential presidential candidate Ahn Cheol-soo, projects a free, more laid-back fashion sensibility. Often seen wearing checkered-print and blue shirts, sports jackets and even big backpacks, Ahn’s style is seen by fashion experts as the most youthful and “liberal” of the bunch. Before his present position as professor at Seoul National University, he was the CEO of security software company AhnLab and his style was that of a typical office worker, with short hair, suit and necktie. These days, his hair is longer and he is rarely seen wearing a necktie or white shirt.

“Ahn’s style is both fresh and anti-authoritarian,” said Kan Ho-sup, a professor of fashion design at Hongik University and a mentor to the fashion reality show “Project Runway Korea.”

“In this respect, his style is very approachable for the public as well as being a refreshing take on fashion compared to other politicians.”

Another local politician known for his laid-back, anti-suit fashion is Rhyu Si-min, co-chair of the Unified Progressive Party and former presidential candidate. Instead of dark tailored suits, Rhyu has a calm, scholarly public image and favors casual shirts and sports jackets in light colors, which promote a friendly, folksy image, according to experts.

From left : With sleeves rolled up, U.S. President Barack Obama speaks about “fighting for the middle class” during a campaign rally at Virginia Commonwealth University . [REUTERS] Former U.S. Secretary of State Madeleine Albright wore a sun-shaped brooch during her visit to South Korea to show her support for the Sunshine Policy toward North Korea. [YONHAP] U.S. Secretary of State Hillary Rodham Clinton is known for her brightly colored pantsuits with bold accessories.[AFP]

Although compared to the past Korean politicians’ fashion sensibility has evolved, many experts still say their attire is too rigid, unimaginative and conservative.

Many fashion experts pick Park Geun-hye’s style, among all potential presidential candidates, as the most “politically driven,” in which her consistency in what she wears shows that she wants to build trust with voters.

“Park’s look has always been pretty consistent - simple pant or skirt suits that do not shout. Her fashion conveys a quiet yet authoritative sensibility,” said Yoon, of Andy & Debb.

Yoon added that this conservative look, devoid of any noticeable colors except her party’s official red, can appear to indicate a lack of confidence.

“I think if she chose other colors besides beige, brown and red - for example a strong navy - that would give her fashion a boost. Also, I wish that she would wear a more form-fitting silhouette when it comes to suiting because the formal wear she sports now is too loose for her frame and can look old lady-like,” she said, adding that using strong accessories, like a brooch or necklace, might also help her image.

“Hillary Clinton, for example, is great at accessorizing, whether it’s a bold necklace or brooch that contrasts with a strong-colored suit. Her accessories give off a confident image and also differentiate her from the rest of the crowd.”

“Park Geun-hye’s style, while having the strength of being consistent, gives off a strong conservative image. If she wants to get the attention of younger voters, she needs to think of changing her fashion,” said Jung.

Moon Jae-in’s fashion, while adhering to the textbook “safe” male politician look, lacks personality and points of differentiation, according to designer Woo Young-mi.

“His humble fashion sense is quite nice, but I think if he changed up his style a bit and wore suits that are slimmer cut and trendier, his charisma would show more,” said Woo.

For Ahn Cheol-soo, many fashion experts agreed that his style places him in the lead in terms of grabbing the votes of the younger generation and liberals, although some say he needs to be a bit more stylish while maintaining the general casual mood of his fashion.

“Ahn should not change his style and keep up his easygoing, informal fashion sensibility,” said image consultant Jung Yeon-ah,

But Woo disagrees: “His clothes are quite country-like. I think he needs to dress a bit tidier, with some fashion sense.”