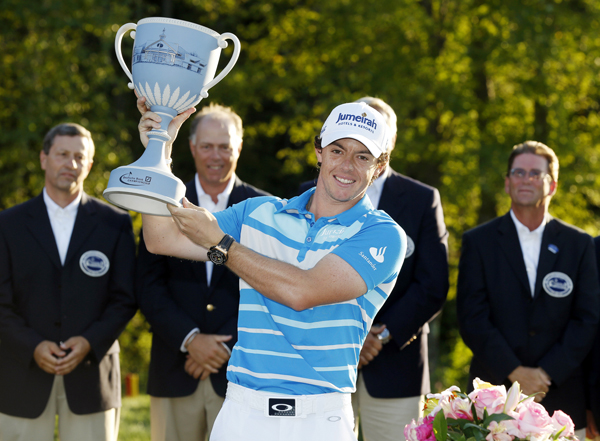 
NORTON, Massachusetts - Rory McIlroy got the start he wanted Monday at the Deutsche Bank Championship, erasing a three-shot deficit in just five holes. The finish was hardly a masterpiece, except for the part when golf’s No. 1 player posed with the trophy.

Boy Wonder didn’t make it easy on himself at the TPC Boston. He tore up the turf on a tee shot that traveled 170 yards, and that was the only fairway he hit over the last five holes.

He had to make a 6-foot putt to save par from a bunker, and a 5-foot putt to save bogey after a pitch sailed from one side of the green to the other. And he had to wait as Louis Oosthuizen’s birdie putt to force a playoff slid below the hole.

“I had a couple of wobbles coming in, but I obviously did enough and I’m very excited to get a victory,” McIlroy said.

That’s all anyone will remember.

On a leaderboard packed with some of the biggest names in golf - McIlroy, Oosthuizen, Tiger Woods, Phil Mickelson and Dustin Johnson - the 23-year-old from Northern Ireland took a giant leap toward establishing himself as the best in the game.

With four birdies in six holes at the start, and limiting the damage from his mistakes at the end, McIlroy closed with a four-under 67 for a one-shot victory over Oosthuizen, joining Woods as the only three-time winners this year on the PGA Tour.

McIlroy goes to No. 1 in the FedEx Cup. And with one of his wins being the PGA Championship, that might be enough for his peers to vote him PGA Tour player of the year. He also has a comfortable gap in the world ranking, and could be tough to catch the rest of the year unless Woods were to win the next two FedEx Cup events.

“He’s not No. 1 in the world for nothing,” Oosthuizen said. “He’s a great young talent with a lot of majors left for him to win. He’s such a cool kid on the course. It’s great playing with him. He makes tough shots look really easy sometimes, especially long irons.

“I don’t think the back nine he hit the ball that great after what he did on the front nine, but he did what he had to do.”

Woods made an early charge to get back in the hunt, though he never got closer than three shots until a two-putt birdie on the par-5 18th gave him a 66.

He finished in third place, two shots behind, and earned enough money to become the first player to surpass $100 million in PGA Tour earnings.

Woods attributed that to higher purses, though he’s responsible for those.

“I think we got some interest in the game of golf,” Woods said. “A lot more youth, that’s for sure.”

One of those kids - McIlroy - keeps winning. The Honda Classic in March. The record eight-shot win in the PGA Championship. And now a FedEx Cup playoff event in Boston.

“Three is a great number,” McIlroy said. “I’d like to make it four - or five - after the FedEx Cup.”

Phil Mickelson also had a 66 and tied for fourth, along with Dustin Johnson, who had a 70 and likely played his way onto the Ryder Cup team. Brandt Snedeker made a strong case for a captain’s pick with a 65-67 weekend to finish sixth.

McIlroy had a three-shot lead with six holes to play, and only a clutch bogey putt on the 17th hole kept him from losing all of his lead.

Oosthuizen, who had to cope with pain in his right shoulder earlier in the round, came back with two birdies on the back to get within one shot.

McIlroy hit a chip over the 17th green into more rough, and it looked as if he would struggle to make bogey.

Oosthuizen, however, missed the green from 140 yards in the fairway, chipped poorly to 10 feet and missed his par putt, and McIlroy calmly sank his 5-foot bogey putt to stay one shot ahead.