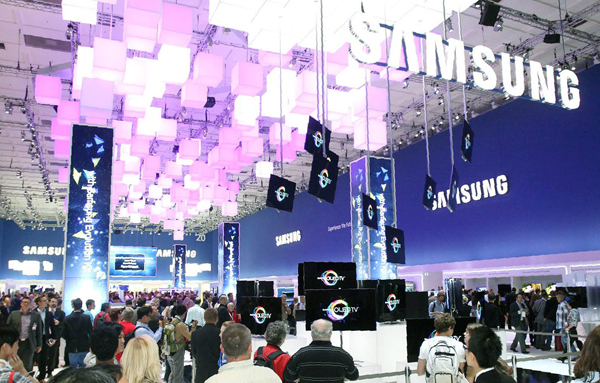 Visitors check out electronics, including next-generation OLED televisions, on display at Samsung Electronics’ booth at the 2012 IFA consumer electronics fair in Berlin on Saturday. [YONHAP]


Samsung Electronics said yesterday two units of its yet-to-be-sold organic light-emitting diode (OLED) TVs went missing while being shipped from its Suwon, Gyeonggi, base to Berlin late last month, where the world’s top TV producer showed off an array of its latest products at an international fair.

The news belatedly surfaced after the tech behemoth yesterday asked the Seoul Metropolitan Police Agency to investigate the disappearance, which could have been an attempt by industrial spies to steal cutting-edge flat-screen technologies.

Samsung packed around 50 OLED TVs in a couple dozen large wooden boxes on Aug. 21, and they arrived in Frankfurt by cargo flight on Aug. 24. From Frankfurt to Berlin, the TVs were transported in trucks and arrived on Aug. 28.

“Our employees in Berlin discovered, after opening each of the boxes, that two TVs were gone from one of the boxes,” said a Samsung spokesman. The company reported the case to the police in Berlin, since where the TVs went missing has not been clarified.

Around 30 of the televisions were for presentation at the 2012 IFA consumer electronics fair, and the rest were to be sent to sales outlets across Germany. The fair kicked off on Friday and lasts until Wednesday.

“Given that the lost TVs have an immensely promising future and embrace vastly advanced technologies that are ahead of competitors by several years, we are weighing the possibility of theft,” said another source with Samsung.

The missing OLED TVs were first unveiled in May in Korea. Offering improved picture quality with deeply saturated colors and high contrast, the thickness and weight of the next-generation TVs are almost one-third of LCD counterparts. The top electronics maker has spent trillions of won developing them.

The OLED TVs are expected to cost around 10 million won ($8,825), more than twice the price of high-end TVs currently on the market.