Local insurers are placing a new accent on risk-management as falling interest rates, a sagging economy, the low birth rate and aging population inspire fears that Korea may be following in the footsteps of Japan and its spate of insolvencies.

Veteran asset managers at Samsung Life Insurance, Korea’s largest insurance firm, have been coming to work at 6:30 a.m. for regular morning meetings since the Bank of Korea cut the key interest rate by 0.25 percentage point to 3 percent in July. They discuss future investments after tracking movements on the U.S. and European stock markets.

“As the key rate keeps dropping, there is a widespread fear that we may be heading in the same direction as Japan, which has seen seven insurance companies go bankrupt since the end of the 1990s, when the Bank of Japan reduced interest rates to almost zero,” said an employee at Samsung Life.

“We’re investing more of our assets in domestic and foreign bonds than ever before, and we’re desperately searching for new long-term, safe investments.”

Kyobo Life Insurance President Shin Chang-jae has ordered his executives to treat Japan as a case study in order to map out strategies to ride out the era of low interest rates.

According to the Korea Insurance Research Institute (KIRI), seven Japanese insurers including Taisho, Daiichi and Chiyoda filed for bankruptcy from 1997 to 2001. This came after they failed to narrow the widening gap between their promised returns to policy subscribers and the actual sums they received on their investments as interest rates hovered at historic lows.

Industry insiders expect other insurers to follow a similar approach of holding regular crisis meetings as Tim Condon, chief economist at ING Financial Markets, projected yesterday that the BOK’s monetary policy committee is likely to cut the key rate by another 0.25 percentage point to 2.75 percent this month, as exports and industrial output remains sluggish.

To keep their financial sheets healthy, both life and non-life insurers have started moving their main source of asset investment from stocks to safer assets such as long-term bonds due to uncertain economic conditions triggered by Europe’s debt crisis.

“Our top priority is raising the share of our investment in bonds to the 40-percent range, up from around 30 percent at present, as demand for safe assets continues to grow,” said an employee at a life insurer who spoke on the condition of anonymity. 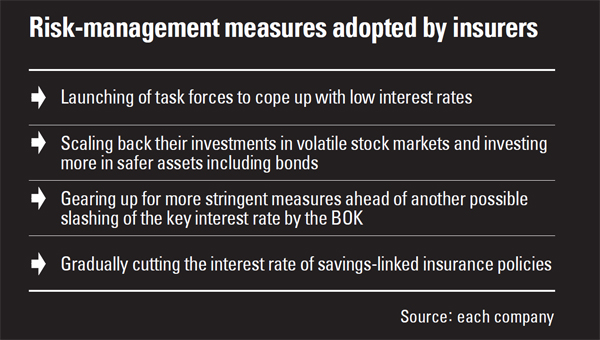 Another employee at a non-life insurance firm said that 60 percent of the assets it handles were invested in bonds as of July, up slightly from 58 percent earlier this year.

Meanwhile, insurers cut the interest rate on savings-linked insurance policies to below 5 percent in August.

“If Korean insurance firms don’t want to follow in the footsteps of Japan, they must reexamine their insurance policies .?.?. and long-term asset investment plans,” said Jeon Yong-sik, a researcher at KIRI.

KIRI estimates that the annual growth rate of insurers’ premium incomes will slow to 7.3 percent this year, down from 10.2 percent in 2011.