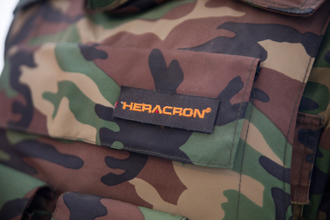 Imposing the ban, a federal judge in Virginia ordered Kolon Thursday to return all documents containing DuPont’s trade secrets to the U.S. company and delete related files from its computers by Oct. 1.

Kolon filed an injunction to block the ruling.

The ruling is being seen in Korea as another unfair court decision following Apple’s triumph over Samsung in a patent lawsuit in California.

Judge Robert Payne of the Eastern District Court of Virginia, who was a former lawyer at law firm McGuire Woods, which represents DuPont, ordered last Thursday that Kolon stop producing and selling products made from its para-aramid fiber, dubbed Heracron, in the United States and other markets for two decades.

The judge cited a jury verdict from a trial last November that said Kolon stole confidential technology from DuPont.

“The court’s ruling to let a company look in its rival’s computer system lacks common sense,” an official at Kolon said. “Everything from banning Kolon’s global sales of the aramid material to ordering the company to open its data to an American rival is senseless,” he added.

The jury awarded Dupont $919.9 million in damages, equivalent to about 70 percent of Kolon’s total assets. The amount of damages is considered exorbitant because Kolon has only exported about 3 billion won ($2.6 million) worth of Heracron to the U.S.