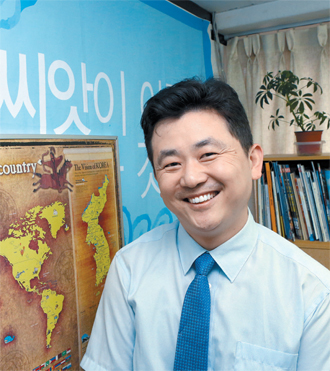 Park Ki-tae Founder of the Voluntary Agency Network of Korea

When Park Ki-tae, the founder of the nongovernmental organization Voluntary Agency Network of Korea (VANK) was a college student, he was shocked to learn that his foreign friends were ignorant of the history between Korea and Japan.

With the belief and desire that he could provide accurate information about Korea to foreigners, Park established VANK in 1999 as an attempt to change foreigners’ perspective, particularly about Dokdo, Korea’s easternmost islets, and to raise their awareness about Korean history.

The nongovernmental organization educates foreigners both on and offline, through its members, with Park as an instigator and motivator for Koreans and foreigners alike to become more proactive on historical and current issues.

As more and more individuals communicate via the Internet beyond borders, VANK now has more than 100,000 members who have a dream of becoming cyber diplomats to let the world know about Korea.

On Aug. 14 and 21, the JoongAng Sunday met with Park Ki-tae, the founder of the organization, at the VANK headquarters in Bomun-dong, northern Seoul. Meeting with Park defied every expectation and prejudice about the organization and himself. Unexpectedly cheerful, Park spent 30 minutes introducing his full-time staff, including interns from Taiwan and the United States. Park talked about the role of VANK and his dream to raise a generation of VANK members who will play an active role in the world.

The biggest accomplishment for the past 13 years since VANK was founded in 1999 would be that the world began to recognize the “East Sea,” Park said.

Around 100,000 members from all around the world voluntarily request major institutions and organizations to correct any misleading Korea-related information.

Since 1999, the number of members has been growing every year. When Korea-Japan relations become as frosty as they have been lately, subscribers flock to the organization, with around 1,000 new members registered every month. Among the members, 30 percent of them are active members who pay 30,000 won ($26) in subscription fees. VANK also formed 440 clubs in elementary, middle and high schools across the country, so that young people could join as a full members and learn ways to promote Korea.

There is no fixed format or method to members’ activities. As Dokdo has become a popular issue recently, many Dokdo-related ideas flow in. On a bulletin board of its Web site, ideas come up that suggest adding a Dokdo song to the singer Psy’s “Gangnam Style” album, now set to be released in the United States after the song went viral worldwide. Some of them posted their own introductory text about Dokdo and Korea in English to suggest lyrics. VANK gathers these ideas to expand various campaigns.

According to Park, the goal of VANK is to “have exchanges with the world,” and he would rather be classified as an “internationalist” than a patriot despite his stance on Dokdo.

Park described VANK as an organization that provides accurate information about Korea to reach people around the world.

“I first established VANK as a college student who did not have an opportunity to go abroad in hopes of having conversations with foreign students, exchange different cultures and study history,” Park said. “It is important that we do not exchange distorted facts and information about each other.”

The birth of VANK

VANK had a weak start. Park was a graduating college student at the time who was preparing to begin his job search. He only knew a few English trade terms learned in an international trade class, owned a Web site he created in his “Internet practice” class as an assignment and had a score of 680 on the Test of English for International Communications (Toeic). These were the only resources Park could use at the time.

However, a few letters he sent under the VANK name became a seed to properly inform Korea about the world, and after 13 years, it grew into a full organization. In his accomplishments, Park’s zeal and action found a way to contribute to society without an established list of qualifications.

Initially, his ambitions were not tremendously great. He dreamt of chatting with foreigners visiting Korea, landing a mundane marketing job or finding a part-time job with a decent hourly wage. Although he firmly believed that the world was wide and there were plenty of jobs to do, the world gave no opportunities to Park.

Now, when he looks back, he can laugh and talk about it, but at the time the stress was great, he said.

“As I always had a lot of interest in international exchange, I applied for the Bucheon Fantastic Film Festival as a college student volunteer. I believed that I would obviously get it without much difficulty, but I did not make it past the application phase of the selection of candidates,” Park said.

After that, in he consistently failed to land a job, even a part-time job that offered minimum wage of 5,000 won per hour.

“Everywhere I wished to work was set up for elite college students, and there was no place I could fit in by graduating from an unknown college and having low qualifications,” he said.

It seemed that the obstacles he had to overcome were impossible. VANK was an expression of Park’s desire to go out into the world, in an environment which did not allow any of that experience.

Nevertheless, bouncing back and setting up an organization himself became the project of a lifetime.

He says liberal arts classes at college, which students reluctantly take only in order to fill the credits, gave him the biggest help.

“When I took an international trade class, I was given an assignment to establish a virtual company or organization and come up with a format that promotes campaigns or products to sell,” he said.

Park created an international exchange Web site to become pen pals with international students, and started sending letters to universities and educational institutions around the world that had opened Korean Language Departments. The basic concept of VANK was a “cyber tourist guide,” which emerged as a popular site drawing 10,000 visitors daily.

VANK has a stubborn reputation, spotlighted as an NGO promoting an uncompromising view of Dokdo and the East Sea to foreigners, international mapmakers, book publishers and other institutions.

“It is true that VANK always keeps the Dokdo issue in mind,” he said.

“Every National Liberation Day, our members visit Dokdo for three nights and four days for a declaration ceremony to inform others about the facts and remind ourselves of our passion about Dokdo.”