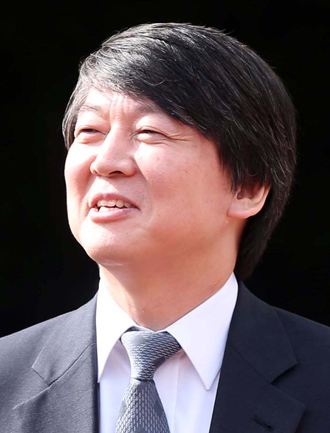 Ahn Cheol-soo, the great presidential hope for the liberals, talked about the December race and left everyone confused.

Ahn, the 50-year-old software mogul-turned-scholar who has hinted he will run but not confirmed it, visited the village of Mundang in Hongseong, South Chungcheong, on Friday. During the visit, he was asked if he would run in the presidential election.

“My goal is not the presidency,” Ahn was quoted as saying on the blog of a farmer who was at the meeting. “I want to contribute, in any form, to resolving the pending issues of our country.”

Ahn added that he had never personally said that he would run in the election but that he “was summoned” to run.

“Because I am still young, an opportunity will come this time or next time,” he said according to the blog. “But anyway, that’s not my ultimate goal.”

After Ahn’s remarks were reported by the media, shares of Ahn’s software company AhnLab plummeted yesterday as soon as the market opened. The share price dropped by 5.87 percent, closing at 117,000 won ($103).

Ahn’s associates also reacted in panic, and Ahn’s spokesman denied that he was hinting at not running.

“Ahn always said becoming the president is not important, but making contributions to society is important,” Yoo Min-young, Ahn’s spokesman, said yesterday. “What he said was not different from his usual comments.”

“Ahn often criticizes politicians and the media for making incorrect interpretations of his remarks,” said a lawmaker from the Democratic United Party.

“But the public also has a hard time understanding his ambiguous remarks. If he is worried about being misunderstood, he needs to step out and communicate more publicly.”

After publishing a book about his philosophy, Ahn, the dean of Seoul National University’s Graduate School of Convergence Science and Technology, has been touring the country to listen to people’s opinions.

But he has shared little information about his plan with the media or apparently the liberal opposition parties, which want to know if he’s planning an independent run or not.

The DUP leadership pressured Ahn further yesterday to join their party, stressing that the largest liberal opposition party won’t back his candidacy if he stays outside the party.

In an interview with PBC Radio, Representative Park Ki-choon, deputy floor leader of the DUP, stressed that it won’t be possible for Ahn, if he wins the presidency as an independent, to run the country without support from a major political party.