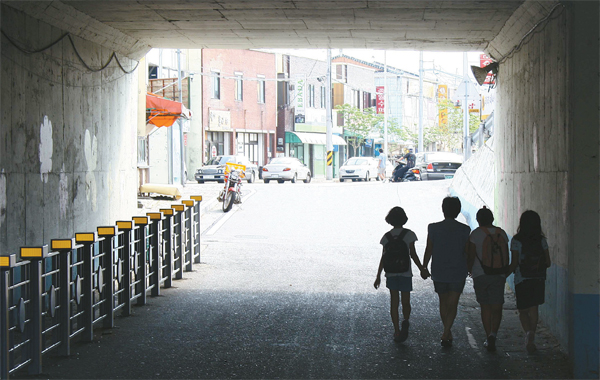 Since a 7-year-old girl was abducted from her home and raped last week, parents in Naju, South Jeolla, can be more frequently seen taking their children to and from school. By Oh Jong-chan


NAJU, South Jeolla - The trail along the Yeongsan River in Samyeong-dong, Naju, is a popular place in the evening. The place is usually crowded with people riding bicycles or jogging.

Around 7 p.m. is generally a busy time for residents. The mild weather should have brought out the crowds yesterday, but it was hard to find anyone out and about.

Six days after 23-year-old Koh Jong-seok kidnapped and brutally raped a 7-year-old girl on the riverside of the Yeongsan River, places around the river were deserted.

At 10 p.m., restaurants and bars are usually filled with people eating or drinking with their co-workers or friends. Internet cafes are typically brimming with students playing computer games after finishing their hagwon (private academy) studies.

However, the scene has been drastically different in the last six days because people terrified by the crime tend to hurry home after their work is done.

“I’m even scared to take out my garbage,” a 40-year-old Internet cafe owner surnamed Park told the JoongAng Ilbo. “My hands trembled and knees knocked when I saw Koh carrying out a mannequin wrapped in a blanket from the victim’s house while he reenacted his crime over the weekend.”

The suspect Koh was a neighbor of the victim’s mother. The mother’s children used to call the suspect uncle and Koh used to call the victim’s mother sister. But the uncle one day abruptly changed. On Thursday, Koh kidnapped the girl while his mother was playing computer games at an Internet cafe and raped her. The victim was found naked and wrapped in a blanket near the river next day.

Anxiety has spread all over Naju, even during daytime. In the morning and afternoon yesterday at Yeonggang Elementary School in Samyeong-dong and Naju Elementary School in Seongbuk-dong, about 4 kilometers (2.5 miles) away from the crime scene, the number of parents driving or walking their children has increased strikingly.

“I drove my two children to school after reading about the crimes in the newspapers,” Jeong Seon-gi, a Samyeong-dong resident, told the JoongAng Ilbo. “I told my wife I will take them home after school.”

“Our daily sales have dramatically decreased since the crime occurred,” said a 20-year-old part-timer surnamed Kim at a convenience store nearby Naju police station. “The village is very depressed from the crime.”