Land mines float down from North due to rains

Land mines float down from North due to rains 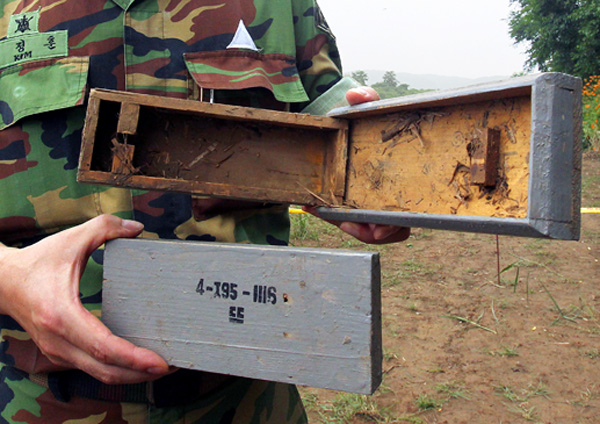 A wooden box land mine


South Korean military have found 16 wooden-boxed land mines believed to have been washed away from North Korea after heavy rains, and are searching for similar mines near the heavily fortified border area, the Joint Chiefs of Staff (JCS) said Tuesday.

Front-line military units in Gyeonggi have collected 16 land mines, including 12 empty boxes, in downstream areas of the Imjin River and the Hantan River since mid-August, the JCS said.

Officials suspect the mines made their way south due to swollen water levels after two storms hit the Korean Peninsula, including North’s Hwanghae Province and the nearby border city of Kaesong, in recent weeks.

The JCS said it has ordered subordinate units to check for any misplaced mines in border regions for the safety of residents.

“As wooden-boxed land mines float easily and don’t look like explosives on the surface, people may touch them out of curiosity,” said Lee Boong-woo, a JCS official. “We advise people to report to nearby police or military units if they find wooden or plastic boxes.”

The box mines are 20-centimeters (eight-inches) wide, nine-centimeters long and four-centimeters tall. They are designed to explode when the box’s cover is opened or a certain amount of pressure is put on it.

A South Korean man was killed in July 2010 when a wooden-boxed land mine he found in the Imjin River exploded while he was carrying it.

Millions of land mines are believed to have been laid on the divided peninsula during the 1950-53 Korean War, particularly in the Demilitarized Zone that bisects the peninsula. According to the military, 230 land mines have been detected in the last three years near the border region.