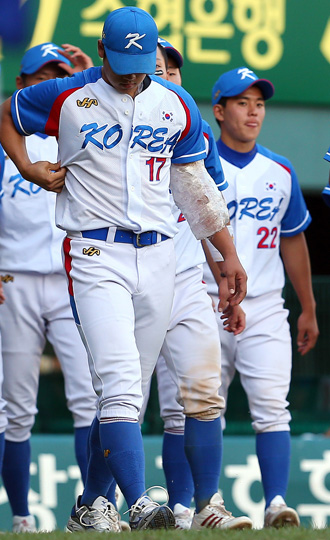 Reliever Shim Jae-min and other members of the U-18 baseball team leave the dugout after a 7-3 loss to Taiwan in extra innings in Seoul, yesterday. [YONHAP]

Korea’s bid to win a sixth U-18 World Baseball Championship title hit a snag with a 7-3 loss to Taiwan, the defending champions, in their opener of the final round of the youth tournament in Seoul yesterday.

The hosts will have to win both remaining games in order to advance, including one against archrival Japan at 6:05 p.m. tonight at Mokdong Stadium.

Team Korea, led by decorated manager Lee Jeong-hoon, had expected to easily overcome Taiwan and answered questions before the match about the game versus Japan, the team it expected to meet again in the finals.

Japan, fighting to win its first title, also got off to a shaky start in the final round, succumbing to Colombia 3-0 yesterday.

“We will mobilize every player available for an all-out war,” said Korean manager Lee Jeong-hoon, referring to the Japanese game, before the Korea-Taiwan bout started.

Japan will be another tough task for the Korean team with its stellar pitching rotation composed of Shintaro Fujinami, Yu Kambara and Shohei Otani.

Fujinami, who is expected to start on the mound against Korea, led his Osaka Toin High School to the Japanese national championship last month, allowing only two hits over the nine innings during the Aug. 23 final.

The right-hander, who can throw up to 153 kilometers per hour (95.1 miles per hour), shut out Japan’s second Group B match against Taiwan last Saturday, which ended in a 2-0 win.

“It seems like that Fujinami will start against us and playing at night could make it more difficult for us to deal with him,” manager Lee said.

Korea had beaten its three previous opponents in matches that started at 2 p.m. Its previous loss versus Colombia came during a night game. According to baseball officials, the Korean youth baseball players have not practiced much under the lights, where they have difficulty following the ball.

Korea’s pitching force is a weak spot as its ace Yoon Hyoung-bae of Bugil High School is listed as questionable. The No. 1 pick in the draft for the 2013 season of the Korea Baseball Organization, the country’s top professional league, struggled against Colombia in the team’s losing effort.

Yoon, who is known to be dealing with an injury to the fingers of his right hand, took the mound as a reliever when Korea was leading Colombia 1-0 in the seventh inning, but he blew the save.

He then allowed three runs against Taiwan over three innings last night.

Korea’s offense was also put to the test yesterday as it trailed Taiwan throughout the game. Taiwan got on the scoreboard first in the sixth inning with two runs, and Korea matched the score in the bottom of the sixth.

Taiwan took the lead again in the seventh inning with a run. Korea managed to take the game into extending innings as Song Jun-suk hit an RBI single with two outs in the ninth.

Four Korean pitchers, Song Ju-yeong, Shim Jae-min, Lee Geon-wook and An Gyu-hyun were mobilized in the top of the 10th but allowed four runs combined. Korea had a chance to turn the game around, loading the bases with no outs in the bottom of the 10th, but left the runners on.

The two berths to the final on Saturday will be given to the two teams with the best combined record.