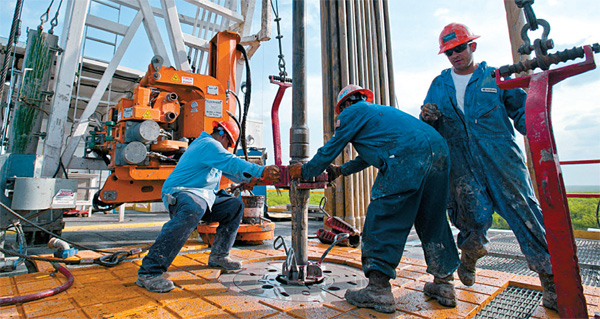 
Shale gas, a cheap and abundant energy form trapped in shale formations, was not easily extracted until recently due to its being dispersed over a wide area, resulting in low returns on investments.

But the government is now bent on encouraging local companies to explore untapped reserves overseas in a bid to develop this new energy source as the threat of domestic power outages looms large in peak times during summer and winter.

“Many Korean companies are interested in taking part in such projects,” said Cho Seok, a vice minister of knowledge economy, during his trip to Texas last week. “They are also paying attention to how to import the gas that has already been mined and how to use it.”

Shale gas fields like Eagle Ford have transformed the U.S. into the largest producer of natural gas in the world in the last few years. Previously, the country was tipped to become the world’s largest natural gas importer. However, it is now so flush that the U.S. Department of Energy has even started allowing exports of liquefied natural gas (LNG) for the first time in 40 years.

Cho said the ministry may be in a position to help local companies expand their investment opportunities in this area as it takes a leading role in overseas gas explorations.

He also recently visited a gas field in Horn River, Canada, with representatives of local companies such as Posco, GS Energy, SK Gas, and Samsung Engineering and Construction to consult on ways that they can acquire the new energy source.

“It can be burdensome to pursue such projects as they cost a lot of money,” said an industry source. “However, we cannot just sit idly by and watch the changes shale gas brings to the energy industry.”

The Ministry of Knowledge Economy is set to announce today its plan for future investments in, and development of, the shale gas industry. “We definitely need to get our hands on this,” said Cho.

As is the case with oil deposits, no shale gas reserves have been confirmed in Korea, which imports most of its fossil fuels. But with shale gas being seen as a viable and perhaps more stable substitute for oil in the future due to its widespread availability, the government is set to jump on this bandwagon to secure an energy source that is not as vulnerable to fluctuating global prices.

Two public companies, KNOC and Korea Gas Corporation (Kogas), are now working on ways for Korea to shore up its supplies in North America. KNOC is focusing on reserves in the U.S., while Kogas is exploring potential deposits both there and in Canada.

KNOC has been rolling up its sleeves to explore for shale gas in the same area that it is hunting for natural oil called condensate, as wet gas fields tend to contain deposits of both, according to Lee Ji-pyeong, an analyst at LG Economic Research Institute (Lgeri).

“When exploring, we get both oil and gas,” said Lee Seong-gi, the director of KNOC’s new projects team. “So, we are trying to diversify our energy portfolio here, even to unconventional oil, and also to send back the energy we’ve found in Eagle Ford as soon as possible.”

It will be hard to ship the gas from Texas this year due to administrative road blocks, he added.

Kogas will import 3.5 million metric tons of shale gas from Cheniere Energy Partners based in Houston from 2017.

Natural gas can be divided into conventional and unconventional varieties. The former, which most people are familiar with from their everyday use, is usually concentrated in one area, while the latter is more scattered. Even though it was first extracted in the 1970s, unconventional gas has been less popular as it requires extremely expensive and hi-tech equipment to get out of the ground.

However, as technology has advanced over the last decade, shale gas has become more attractive to prospectors and is increasingly used as a primary energy source. There is a confirmed global reserve of 187.4 trillion cubic meters spread over 31 countries, putting it at a similar level to both natural gas and oil. But Samsung Economic Research Institute (SERI) claims the potential reserve could be as high as 635 trillion cubic meters.

“Gas will account for one-quarter of all the energy consumed by 2035, up from 21 percent in 2008, while coal use will decrease from 27 percent to 22 percent,” said Jung Yu-kyung, a senior researcher at SERI.

Thanks to the cheaper costs, shale gas production in North America jumped to 128.8 billion cubic meters in 2010, marking a 15-fold increase in the space of a decade.

“As it can be commercially distributed to U.S. consumers via pre-existing pipelines, no further investment in infrastructure is required,” said Jung.

Currently, China has the biggest shale gas reserves in the world, while the U.S. ranks second. Deposits in Russia have not yet been assessed. An increased dependence on this energy source could also trigger global power shifts away from the Middle East and Russia, the traditional sources of oil and natural gas.

Although China lacks the infrastructure to expedite shale gas exploration, it is as active as the U.S. in this department, according to a recent report by KNOC. From the early 1990s to 2010 in the U.S., consumption of shale gas as a share of total energy use jumped from a mere 1 percent to 24.1 percent. In terms of shale gas production, China ranks second only to the U.S.

“Both countries are very enthusiastic about shale gas, as it gives them an opportunity to lower their energy dependence on the Middle East and Russia,” KNOC said, adding that the U.S. expects it to account for 49 percent of total gas production by 2035, up from 23 percent in 2010. 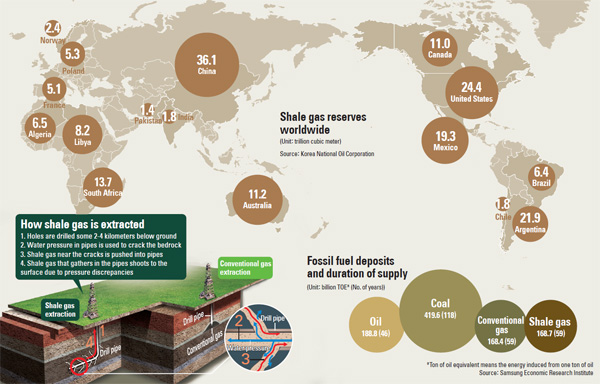 Reasons to say no

Although Europe also has abundant reserves, extraction has been prohibited for environmental reasons due to fears of soil contamination by the chemicals used to draw shale gas into pipes, such as uranium. France, the U.K., Sweden and Bulgaria all banned drilling using such chemicals last year. Other hazardous chemicals, including methane and carbon dioxide, can also be produced during the process of extraction.

Yet some see these fears are being overblown. “In the process of extraction, the risk of damaging the environment is just as high for shale gas as it is for other natural resources,” said Yoon Yeo-jeong, an analyst at Lgeri. “Energy companies are also trying to find less hazardous chemicals that they can use.”

Poland, which has the largest reserves of shale gas in Europe, is set to assess 14 gas fields to see if extraction is possible. However, the road ahead may be strewn with rocks of a different kind as America’s Exxon Mobil stopped exploring in Poland in June after failing to dig up commercial quantities of unconventional fuel. It also abandoned similar exploratory work in Hungary in 2009.

The relatively cheap price of shale gas may also work against it, as companies decide it is not worth the bother given the low amounts they can squeeze out of the ground compared to natural gas.

“The importance of natural gas [as an alternative to oil] is certainly on the rise, but we cannot conclude that shale gas is the answer,” said Danny Brown, Anadarko’s general manager for the Eagle Ford project. “We must, of course, develop shale gas, but we may benefit more from the balloon effect that will help lower the overall price of natural gas.”

Pros and cons for local industries

Local shipbuilding, steel and construction companies are expected to benefit from the growing interest in shale gas. According to the Korea Evaluation Institute of Industry Technology (KEIT), local companies with experience in plant - or pipe - building are expected to enjoy another heyday as liquefied gas deliveries from the U.S. will probably shoot up, as will orders for LNG ships.

“There is going to be a new global market for LNG ship orders as more shale gas is produced,” said Park Gwang-soon, a researcher at KEIT.

Local steel consumption is also expected to rise as shale gas lies several kilometers underground, requiring the use of drills and sturdy pipes that do not leak. Steelmaker Posco even opened an office in Houston in May to prepare for a surge in pipe orders. Samsung Engineering also has increased the number of employees at its Houston office this year to 111, up from three in 2007.