To Sept. 16: The retrospective of Han Mook features about 40 paintings by the 99-year-old Paris-based Korean artist.

Paintings on display were done from the early 1950s to 2000s, showing the history of not only an artist but also Korean geometric abstract art.

Han has always been adventurous and never settled for the status quo, the gallery said. He went to Paris in the early 1960s “to be a serious painter,” quitting a prestigious job as a professor of art at Hongik University.

Since the 1970s, space has been an inspiration for him, as he was greatly impressed by the Apollo 11 mission in 1969 when Americans Neil Armstrong and Buzz Aldrin became the first humans to set foot on the moon. The exhibition includes various abstract depictions of space. 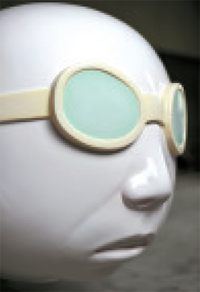 To Sept. 22: The solo show of SungMyung Chun shows his latest sculptures and installations.

The 41-year-old artist is already well known for a series of sculptures featuring a character in a striped T-shirt with a sullen face that resembles the artist’s own, in various dramatic situations.

But in this exhibition, the artist has thrown his signature style and ventures into new styles with pastel-colored sculptures and objects conceptually arranged.

“His works have reflected the self,” the gallery said in a press release. “The recent works have been extended from the inner self to the social self. In this, his ninth solo exhibition, Chun develops his new interest in the self in a social context by experimenting with new colors and morphological transformations.”

An Artist’s Talk will be held tomorrow at 2 p.m. in the gallery’s South Atrium (B2).

To Sept. 25: The French luxury brand Hermes has been granting Missulsang, the Korean word which literally means an art award, every year since 2000.

It selects three candidates, supports them to create new works for a group exhibition and selects one as the final winner and recipient of a 20 million won ($17,640) prize.

This year, Koo Dong-hee, Jackson Hong and Lee Mi-kyung have been nominated and are holding an exhibition at Atelier Hermes. The winner will be announced on Wednesday.

Koo, 38, is presenting “Helter Skelter,” an installation project inspired by the Beatles song of the same title and by Charles Manson, a notorious American criminal. Hong, 42, shows “Mass Production,” a group of familiar objects such as eggs and their cartons that he made 1.5 times as large as their original sizes. “The 1.5 times larger size is in between a real object’s size and the size of a monument,” Hong explained.

And 46-year-old Lee’s “Fence” provides some twists for viewers. The 1.8-meter-high (5.9-foot-high) white fences lure viewers to step on the nearby stools and look over the fence inside, but there is nothing.

Admission is free. The gallery is open from 11 a.m. to 6 p.m. It is closed on Wednesday. Go to Apgujeong Station, line No. 3 and walk for 15 minutes.

To Sept. 28: The exhibition focuses on the theme of anxiety in Korea. “Though Korean society seems stable and peaceful from the outside, multiple signs of anxiety are starting to surface from the inside,” the museum said in a release. The exhibition features works in various genres by nine artists. But their works share a common point - the direct or indirect expression of anxiety.