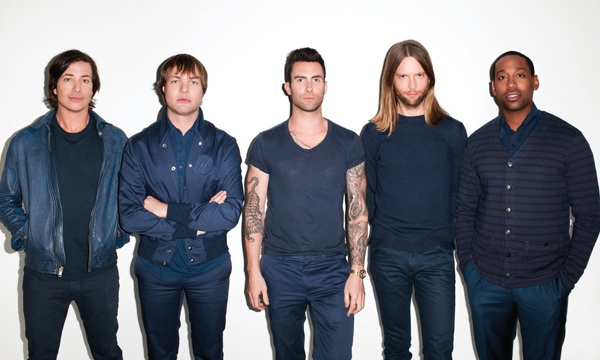 Maroon 5, known for hit songs like “Moves Like Jagger,” will hold a concert at Assistant Stadium of Jamsil Sports Complex in southern Seoul at 7 p.m. on Sept. 15. The band will play in Busan on Sept. 14. See MUSIC. Provided by CJ E&M

Tomorrow: The Mingus Big Band is a jazz ensemble based in New York City that specializes in the compositions of the late Charles Mingus. The band has received six Grammy nominations and won a Grammy in 2011 for Best Large Jazz Ensemble Album for “Mingus Big Band Live at Jazz Standard.”

For this Asian tour, the band is also composed of saxophonist Paul Foster, trumpeter Alexandre Sipiaguine and pianist Helen Sung.

Saturday: Following the success of shows in 2010 and 2011, Park Concert will present another elite lineup.

Japan’s Yuhki Kuramoto, Canada’s Steve Barakatt and Korea’s Yiruma have collaborated to present “Piano Paradiso,” and the audience will hear Kuramoto’s “Lake Louise” and “Romance”; Barakatt’s “Rainbow Bridge” and “The Whistler’s Song”; and Yiruma’s “When the Love Falls,” featured in the megahit drama “Winter Sonata.”

Saturday: Larry Carlton, a renowned jazz guitarist, is coming to Seoul for a live concert this weekend. Over his career, he has won over four Grammy awards for his competitions and left a significant impact on the jazz culture during the 1970s. He will be performing in Seoul with Gene Coye, Travis Carlton and Dennis Hamm.

The concert will begin at 7 p.m.

Monday: Miracle Eyes Concert will be performed by flutist Bae Jae-young, pianist Yoo Ji-soo and violinist Kim Jong-hoon. Kim has been visually impaired from a young age, but that did not stop him from becoming a violin genius.

The concert includes compositions by Beethoven and Brahms.

Sept. 15: Following her bravura comeback from cancer, Seo Hye-kyung will perform a program that will include compositions from Chopin, Beethoven and more.

The concert will begin at 5 p.m.

Sept. 15: With hit songs that have topped pop charts such as “Moves Like Jagger” and “Payphone,” Maroon 5 is coming to perform in Seoul and Busan after releasing its fourth album, “Overexposed.”

The band will play at Busan Indoor Gymnasium on Sept. 14 and Jamsil Sports Complex on Sept. 15.

Sept. 24: Keane, the English alternative rock band, is coming to Korea for its “Strangeland: World Tour,” which started in May. Keane’s 2004 debut album, “Hopes and Fears,” won multiple awards and was the second-biggest-selling British album of the year. Keane is known for using a piano as its main instrument.

Tracks such as “How Am I Supposed to Live Without You” and “Go the Distance”- the latter, which was featured in the Walt Disney motion picture “Hercules”- are also popular.

Sept. 21 to Oct. 7: “A Journey,” by the late Yoon Young-sun, is centered around the friendship of six men and how they came to support each other in times of hardship.

The performance will start at 8 p.m. Monday to Friday, with an additional show at 3 p.m. on Wednesday.

To Oct. 7: “Wicked” is a musical based on Gregory Maguire’s best-selling novel “Wicked: The Life and Times of the Wicked Witch of the West.”

To Oct. 21: The popular musical is back after its performance in 2005, and this time it will be shown at the Sangsang Art Hall.

The story centers around rock singer Hedwig, who after a failed sex reassignment surgery goes on an American tour.

To Sept. 22: The modern Korean folk music concert mixes traditional music with modern melodic sounds through the use of the gayageum and janggu (double-headed hourglass-shaped drum generally played with one stick and one hand) along with an electric piano and a modern drum set.