Law school system for the better?

Law school system for the better? 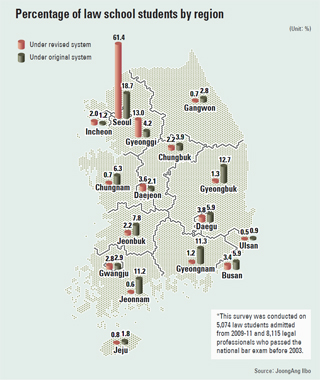 Koreans describe a person from an underprivileged background who climbed the social ladder as “a dragon ascending from a little stream.”

And it is a widely held belief that standardized tests like college entrance exams, bar exams and civil servant tests help these dragons rise.

All three tests have minimum requirements for test takers and are considered the last path through which people from modest beginnings can climb the social ladder.

Villagers in rural areas often put up large banners to celebrate whenever a local child is admitted to a prestigious university or passes the national bar exam.

Before 2009, anyone who graduated from high school could take the bar exam, and those who passed were required and guaranteed two years of training at the Judicial Research and Training Institute.

But the system changed when Roh Moo-hyun administration introduced the current law school system that only allows law school graduates from select schools to take the bar exam.

Despite public outcry and criticism that the system would limit the legal profession to those who can afford law school tuition, the reform measure has been implemented since 2009.

Korea’s traditional bar exam has been often accused of being heavy on rote memorization and boasting a very selective admissions rate of around 3 percent. Exam takers sometimes retook the bar exam more than 10 times before passing.

While the original intent of the new measure was to select applicants from a diverse array of social statuses, regions and specializations and to stop breeding repeat exam takers, the law school system faces an increasing accusations that it might make the legal profession even more of a club for the wealthy and well-connected.

“Compared to the traditional bar exam that allowed anyone to come and sit for the test, the law school system blocks those who cannot afford high average tuition fees of more than 7 million won ($6,200) for one semester, ” said Jang Yong-geun, a law professor of Hongik University.

According to research carried out by the JoongAng Ilbo, 61.4 percent of law school students nationwide accepted during 2009-11 period live in Seoul, a big jump in the Seoul residence proportion of 18.7 percent among 8,115 passers of the old bar exam.

Among the 61.4 percent of Seoulites, 16.7 percent come from the three most affluent districts (Gangnam, Songpa and Seocho), while those from three regions with relatively low real estate prices (Geumcheon, Dobong and Jungnang) make up only 2.9 percent of law students.

“I don’t usually feel inferior to someone when it comes to household income status, but when I got into the law school, I did feel like that because there are lots and lots of well-off students,” said a 29-year-old student at Hanyang University School of Law who spoke on the condition of anonymity.

According to data compiled by the Ministry of Education, Science and Technology, 86.1 percent of students at the top three law schools (Seoul National, Korea and Yonsei universities) got their Bachelor’s degrees from one of those three universities.

The Roh administration seemed to be conscious of the likely effects of its new system and sought to ease concerns by imposing a regional quota when granting permission for the establishment of law schools.

But the efforts didn’t pay off and even highlight deeply rooted divides. Major law firms do not hold recruiting sessions at law schools other than the top five schools in Seoul.

“The big law firms, specifically the so-called ‘big five,’ don’t bother to come down other regions to recruit attorneys. And I don’t know anyone who manages to get into recognized law firms among my friends or seniors,” said a 24-year-old female student who attends a law school located in Busan.

By contrast, graduates from prestigious law schools appear to fare relatively well compared to those in regional cities.

“Most of my seniors who want to be an attorney at a law firm found their way into the big law firms,” said a third-year student at Korea University Law School who only provided his surname, Koh.

“But I heard it is rare for graduates from regional cities to be hired as a full-time attorney, even if a handful of them worked as interns,” he added.

Lee Chang-hyun, a state bar exam passer who now works as a law school professor at Hankuk University of Foreign Studies, fully acknowledges the downsides of both systems.

“When preparing for the state bar exam 20 years ago, I just crammed over and over again,” Lee said. “Some questions on the exam were not relevant to the current Korean law.

“But after the adoption of the law school system, I am afraid for a different reason. I am not sure if the inspiring tales of students from poor rural areas rising to become lawyers by studying alone will be told under the new system.”