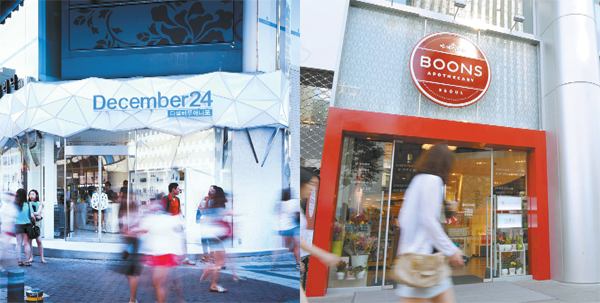 December24, pictured left, a drugstore owned by Cafe Bene, opened its first branch in Seocho-dong near Gangnam Station in southern Seoul earlier this month, opposite rival Boons. Boons, right, operated by E-Mart, opened in June. There are now eight drugstores operating under four brands in the close vicinity of Gangnam Station, also including Olive Young and Watsons. They mainly sell cosmetics, daily products and foodstuffs. Provided by the companies


Drugstores are bucking the trend of declining sales in the retail industry, with their sales growing threefold in as many years due to the soaring popularity of cheaper cosmetics products.

On the flip side, department stores, large discount chain stores and convenience stores are all suffering from operating restrictions, an oversaturated market and the economic slowdown.

As the beauty industry thrives in the country, where per capita income now exceeds $20,000, drugstores, which typically sell cosmetics, vitamins, household items and medications, are gaining in popularity.

Their sales jumped from 113.6 billion won ($100 million) in 2008 to 326 billion won, and are expected to almost double again to 600 billion won this year, according to industry sources.

Earlier this month, a new chain called December24 launched near Gangnam Subway Station in southern Seoul, just across the street from Boons, another new drugstore owned by E-Mart that opened two months ago.

The December24 store, which spans 198 square meters (2,131 square feet) was launched by the Korean brand Cafe Bene, the fastest-growing coffee shop chain in the country, which now has over 800 stores.

The Boons store is even larger, covering 826 square meters on two floors, and is equipped with a skin care salon, hair salon and even a coffee shop.

Gangnam Station is shaping up as a new battleground for drugstores, with five outlets of CJ Group’s Olive Young and one of GS Retail’s Watsons also located there.

The drugstore boom is being led by increased demand for beauty products. Olive Young said that last year it posted overall sales in excess of 200 billion won, and that half of this sum derived from cosmetics and other beauty products. Of the roughly 7,500 different items stocked in each of its stores, beauty-related products account for roughly 50 percent.

However, as it turns out the word “drugstore” may be something of a misnomer as only three in the 270 nationwide include real pharmacies.

Watsons’ beauty supplies account for 60 percent of all of its product categories, while daily necessaries make up 21 percent, food and vitamin products 12 percent and health-related products 7 percent.

“Overseas luxury cosmetic brands can be found at department stores, but drugstores are always the first to present cheaper and famous foreign cosmetics that become popular by word of mouth,” said Kim Lee-seul, a 32-year-old office worker who regularly heads to Myeong-dong to stock up on the latest hot cosmetics.

She said young consumers visit drugstores because they tend to stock better quality cosmetics than those found at either supermarkets or discount stores, while their prices are highly affordable.

A representative from Olive Young said the store is now operating a task force entirely devoted to overseas cosmetic brands, as it is trying to introduce them faster than department stores.

Now drugstores are expanding their presence in university towns and areas as they target this younger demographic. Olive Young, the nation’s largest drugstore chain, has 17 percent of its stores in such areas, while the same share for Watsons is 25 percent.

“We recently opened a store near SungKyunKwan University in Jongno, and Kwangwoon University in Nowon, northern Seoul,” said Ha Eun-young, a marketing director for the company.

However, the drugstore industry is still in a relatively early form of development, according to Oh Se-jo, a professor of business management and administration at Seoul’s Yonsei University.

“Drugstores are emerging as a fourth distribution channel after department stores, discount chains and convenience stores, and they have much room for development,” he said.