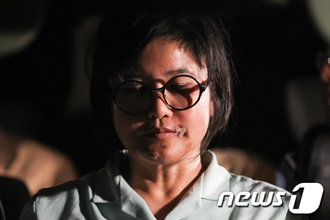 The key suspect in the money-for-nomination scandal involving the largest opposition party lured aspiring politicians with a campaign plan and by promising to use her connections to get them nominated.

Yang Gyeong-suk, a 51-year-old executive of the liberal Internet broadcaster Radio 21, was accused of receiving at least 4.08 billion won ($3.59 million) from three aspiring lawmakers before the April 11 legislative elections, drawing them in by presenting a detailed campaign road map for the general elections with a guarantee of a high return on their investments, the prosecution said.

The Democratic United Party has denied its connection to the case, and Yang and the three men were detained for questioning.

According to the central investigation unit of the Supreme Public Prosecutors’ Office, Yang had created a public relations project worth 10 billion won and used it to attract investors.

Before the April legislative elections, Yang offered the plan to her acquaintances to attract investments, a source from the prosecution said.

According to the source, Yang claimed that a public relations project for a general election guarantees at least 20 percent profit and she expected to gain about 10 billion won.

The business plan specifically included the budget for creating a theme song for a candidate, photos of cars that would be used for campaign events and other details, the prosecution said.

Clause 2 of Article 116 of the Constitution states that expenditures for elections shall not be imposed on political parties or candidates, except for cases prescribed in other laws.

Based on the principle, the state reimburses the entire campaign expense for an elected lawmaker or a candidate who garnered higher than 15 percent of the valid ballots. Those who scored votes higher than 10 percent but below 15 percent reimbursed half of the expense.

When she lured the investors by presenting the project, Yang reportedly stressed her strong connection with Representative Park Jie-won, floor leader of the DUP, and promised they would win proportional representative nominations.

Park has denied any tie to the scandal.

Yang actively supported Park during the DUP leadership election in January as the party introduced the mobile voting system.

Her investors, however, told the prosecution that they began questioning the authenticity of her project because the DUP campaign during the legislative elections was carried out differently than what Yang detailed in her plan.

During the probe, the prosecutors also found that Yang had wired a total of 800 million won to a sister-in-law of former lawmaker Hahn Hwa-kap. The relative of the influential politician reportedly had a close relationship with Yang and hosted a program on Radio 21 for years.

The prosecution also found that several suspicious transmissions were made from a bank account managed by Yang to several Roh Moo-hyun loyalists.

The prosecution said it will further look into the remaining some 30 bank accounts to which Yang wired money. She sent some 140 million won to Roh Hye-gyeong, a former head of Nosamo, a supporters group for the late President Roh.