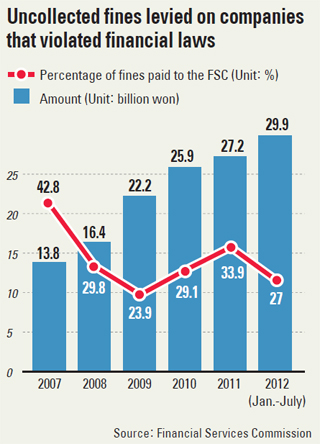 The Financial Services Commission failed to collect 29.8 billion won ($26.3 million) in fines on companies that violated financial laws as of July this year amid deepening economic woes, it said yesterday.

Only 27 percent of the fines levied this year have been collected as of July, down from 33.9 percent in 2011.

FSC officials said the unpaid fines are snowballing year by year because companies claim they can’t afford to pay up.

“It normally takes us about six months to determine whether to fine a company,” said an official at the FSC.

“In the worst cases, companies filed for bankruptcy during the FSC’s inspection period and that made it increasingly difficult for us to collect fines.”

According to the official, among the 27.2 billion won in unpaid fines in 2011, 76.5 percent, or 20.8 billion won, were uncollected because companies were unable to pay them or the FSC failed to locate their offices.

Collection of 2.5 billion won in fines was suspended because the companies entered debt workout programs.

Some insiders say the FSC’s poor performance is a result of a shortage of staff and a lack of cooperation from related government ministries.

The FSC has only two officials in charge of collecting fines from companies after the Ministry of Public Administration and Security ordered it to return employees sent by the state-run Korea Asset Management Corporation for assistance, saying too many workers were stationed at the FSC.

The financial regulator has sought to revise the Capital Market Act to hand over penalty collection to the National Tax Service, but the move was rejected by the Ministry of Strategy and Finance and the tax service.

The FSC said it is currently in discussions with the Ministry of Public Administration and Security to increase the number of officials in charge of collecting fines from companies.