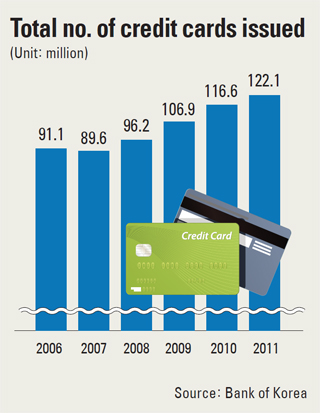 Apparently, credit card companies are up to their old tricks again.

A 43-year-old homemaker was annoyed recently when she received a renewed card from Hyundai Card despite having one month remaining on her existing card, which she had planned to let expire as she cleaned up her finances and debt.

“[Hyundai Card] not only renewed it without my approval, they also demanded later that I give them my personal details over the phone in order to cancel it,” the housewife said. “That is unacceptable.”

Han’s case is not an isolated one.

A 41-year-old office worker surnamed Park said he has been hounded by Hana SK Card to take out fresh loans recently as the company knew he took out a 1 million won ($880) loan in the past and paid it back on time.

He said he informed them that he didn’t require any further cash and that the 20 percent interest rate they were demanding was too high. However, the caller went into hard-sell mode, telling him he had better take advantage of the offer immediately as the government was cracking down on new lending. Finally, the caller said the company would reduce the interest rate if he agreed to the loan there and then.

Despite the government’s effort to tame rising household debt, credit card companies seem to be moving more aggressively to increase their customer bases and borrowing through reckless marketing practices.

According to Bank of Korea, Koreans owned a total of 116 million credit cards at the end of June. This is creeping closer to the 148 million that were in use in 2002, when the country suffered a credit card delinquency crisis resulting from overly liberal issuances by companies that led to a thorough restructuring of the industry.

Competition in the industry has again become fearsome in recent months, especially through phone marketing, as the economic slump has taken its toll on credit card companies’ margins and revenue.

In the first quarter of this year, the six domestic companies that specialize in credit cards suffered a combined loss of 125.6 billion won, while their operating costs rose 10 percent on-year to 223.5 billion won.

“We are continuing our marketing efforts, as our profits shrank significantly after we were forced to lower the commission rates we charge small restaurants and private businesses [in line with a government mandate],” said an employee at one of the firms.

“We are ramping up our marketing by phone as the financial regulator may from this month restrict new credit card issuances.”

Meanwhile, the share of overdue credit card loan repayments climbed to 2.09 percent in March, the first time is has edged past 2 percent since 2009.

“More lower-income households is living beyond their means by relying on their credit cards just to get by as the economy is struggling,” said Ahn Soon-kwon, a researcher at the Korea Economic Research Institute. “Taking stock of those customers considered high-risk, who threaten their profitability, is more important right now than recklessly expanding their marketing efforts.”