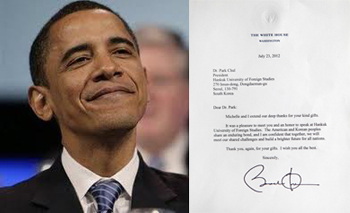 U.S. President Barack Obama, who was officially nominated yesterday at the Democratic National Convention in North Carolina as the presidential candidate of the Democratic Party for his second term, sent a letter to Park Chul, president of Hankuk University of Foreign Studies in Seoul, thanking the school for inviting him to give a lecture in March.

“It was a pleasure to meet you and an honor to speak at Hankuk University of Foreign Studies,” Obama said in the letter.

On March 26, Obama delivered a lecture to more than 1,000 students and faculty at the foreign language higher education institution during his trip to Korea to attend the 2012 Seoul Nuclear Security Summit from March 26-27.

During his 40-minute speech to the audience, the first black president in U.S. history talked about the strong commitment the White House has to maintaining close relationships between the two countries and averting North Korea from developing a nuclear arsenal.