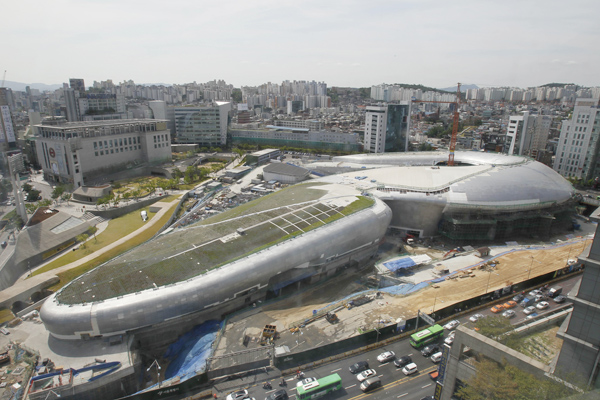 The Dongdaemun Design Plaza & Park has been under construction since 2006, and many people don’t remember why it was built in the first place.[JoongAng Ilbo]


“Content” is a word that is heard a lot these days across various segments of Korean industry.

It is also content - or the debate over it - that has left several humongous buildings in Seoul unfinished, empty and with unclear futures.

Some of them have gotten nicknames, such as “ghost buildings,” “nuisance” or “headache,” mainly because of the inconveniences caused by the prolonged construction process and the architectural dissonance they cause in the urban landscape. All this for purposes that too often are obscure at best.

These structures include the following: Dongdaemun Design Plaza & Park in Euljiro, Jung District, central Seoul; the domed baseball stadium in Gocheok-dong, Guro District, western Seoul; and the Floating Islands in Seocho District, southern Seoul. They have been under construction for years, at a cost of hundreds of billions of won in taxpayers’ money.

Initially, hopes were high. Believers said the projects would be the next “it” buildings that Seoulites talk about and landmarks for foreign tourists.

But because of a change of mayors, lack of research and problems with contracts, among other issues, public support has waned amid increased debate over their future.

The Dongdaemun area is known as a fashion district, with numerous tall buildings housing small and large retailers and wholesalers selling clothes and accessories day and night.

Among the stores sits a gigantic silver building under construction that some call “the world’s largest atypical structure.” Dongdaemun Design Plaza & Park has been a work in progress for several years now.

Former Mayor Oh Se-hoon envisioned the project as a place that would become a glitzy hub of fashion and design, featuring a mall, multipurpose convention and exhibition halls, and a park. Dongdaemun Stadium was dismantled in 2008 to make way for the mayor’s vision.

But with construction dragging on, it appears residents have forgotten what the building, which resembles a structure from a distant future city, is supposed to be.

“Isn’t it a shopping mall like Garden Five [in Munjeong-dong, Songpa District]?” asked one woman, joining others who guessed it had some kind of retail raison d’etre because of its location. Most people, however, said they weren’t sure.

Adding to the confusion, the Seoul Design Foundation, which oversees construction of the Dongdaemun Design Plaza & Park, announced in July it is working on changing the concept of the building.

Park Won-soon became mayor of Seoul after a by-election last October. Unlike Oh, who prioritized fashion and design, Park was more concerned with public welfare and residents’ input. Consequently, he cut funds allocated for fashion projects.

The foundation said its new concept is a “citizen’s design market that’s made by the people and enjoyed by the people.” It’s clear that while the word “design” was key for Oh, for Park it is “people.”

Among the uses under consideration is a public library. The foundation is reportedly spending 200 million won ($176,327) on the concept-change alone and pushing back the opening of the building to next April.

“Dongdaemun Design Plaza & Park cost nearly 500 billion won. If I were [mayor then] I wouldn’t have [built it]. But the construction is almost finished. What do you do? We just have to utilize the facility well,” Park told a Korean newspaper in a recent interview. 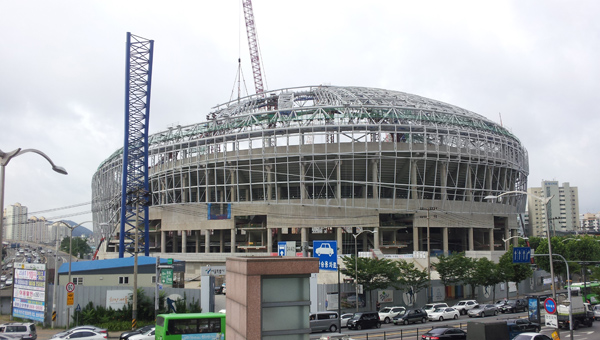 Domed stadium in Gocheok-dong, western Seoul, is criticized as the result of bad judgment.


Play ball? Not so fast

While Dongdaemun Design Plaza & Park may end up having little to do with design, in Gocheok-dong there is a domed baseball stadium scheduled to be completed late next year that has yet to land a team.

On a recent visit, the site of what will be the country’s first domed stadium was covered with concrete and loud with the sounds of drills and hammers. Battling the summer heat, a worker on the second floor pushing a wagon full of bricks gave a deep sigh.

“Construction is 57 percent complete,” said another worker. “We should be able to complete it by the end of 2013.”

The Seoul Metropolitan Government is in a dilemma, with the three professional baseball teams based in the city all declining to move to the domed stadium. They say it would be difficult to attract spectators at the current location.

The Seoul government has spent more than 200 billion won since construction began in 2009 when Mayor Oh was at the helm. And it estimates that operation and maintenance will cost 6 billion to 8 billion won a year.

To assess the location, the JoongAng Ilbo drove from Mount Namsan, central Seoul, to the site of the domed stadium, leaving at 6:30 p.m. and arriving an hour later. It takes about 20 minutes to get to Jamsil Baseball Stadium in southern Seoul.

“Traffic jams in this area are awful,” said Kim Jong-won, a 30-year-old office worker who commutes from Gocheok-dong to Gwanghwamun, central Seoul. “One probably should leave around 4 p.m. to catch a game.”

In fact, the facility was supposed to be a half-domed stadium. But when Korea performed well and took second place in the 2009 World Baseball Classic, calls for a domed baseball field mounted and the Seoul Metropolitan Government changed the plan and earmarked an additional 80 billion won.

But that happened, apparently, without adequate research.

So this summer the Seoul government under the leadership of Mayor Park said it will also use the facility for concerts. “There are different views on the stadium, but we will try to find the best solution,” said Jeong Gwang-hyeon, head of the government’s sports department.

But the reaction to the plan in both sports and performing arts circles has been chilly.

The Floating Islands in the Han got the nickname “Ghost Islands” after being idle for a long time.

“It’s just hard to understand,” said Lee Jae-hwan, chairman of Ilgoo Club of baseball players and coaches. “They built a baseball field and now they want to use it for a purpose other than baseball games?”

An official with Hyundai Card, which has managed Korea concerts of major foreign artists like Lady Gaga, was also critical. “It’s unclear if the sound will be good enough for a performance,” he said. “Location is also a challenge.”

Critics say the domed baseball field in Gocheok-dong, is a classic case of wasting taxpayers’ money. “Clearly [the policy makers] didn’t fully review the potential profitability of the stadium. They were more focused on being popular,” said Seo Yeong-jin, a lawmaker from the Democratic United Party who also serves on the construction committee of the Seoul Metropolitan Council.

But then Seoul is no stranger to major construction projects being delayed or revised.

Case in point: The Floating Islands in Seocho District, southern Seoul, which consist of three connected artificial “islands” that were supposed to be a venue for conventions, performances, and leisure and water sports.

The project was part of Oh’s Han River Renaissance Project, but Park denounced it as a “move aimed only at showing or exhibiting.” He ordered a special audit of the project and that unveiled a series of problems with the contract with related businesses, which triggered a lawsuit.

“Roads and other infrastructures take years to be completed,” said Kim Chan-ho, a civil engineering professor at Chung-Ang University. “And it’s not right that whenever the mayor changes, projects get revised or halted.”

But the biggest problem in these cases, observers say, is that often the city government skips consultations with experts when attempting to change the “content” of built or almost-finished buildings.

“It is understandable that a new mayor wants to revise projects in accordance with his beliefs,” said Jeong Jong-min, a lawmaker with the ruling Saenuri Party and member of the Seoul Metropolitan Council. “But that should go through rational process and be validated through consultations with experts.”