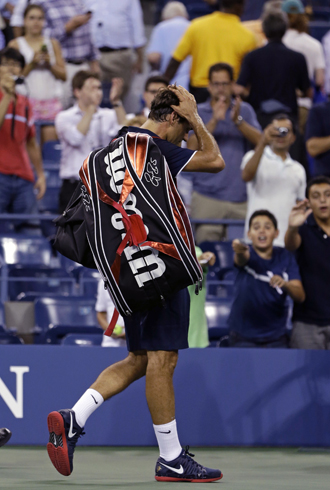 Roger Federer of Switzerland leaves the court after being defeated by Tomas Berdych of the Czech Republic in a quarterfinals match at the U.S. Open on Wednesday in New York. Berdych won 7-6 (1), 6-4, 3-6, 6-3. [AP/YONHAP]

NEW YORK - Roger Federer was knocked out of the U.S. Open on Wednesday when he lost a quarterfinal thriller to Tomas Berdych just hours after his old rival Andy Roddick bid a tearful farewell to his tennis career.

Federer was unable to conjure up any of his old magic as Berdych stormed to a surprise victory, 7-6, 6-4, 3-6, 6-3, handing the world number one his earliest exit from Flushing Meadows in nine years.

Federer could not hide his disappointment after arriving in the Big Apple full of hope following his win at Wimbledon in July.

“There were so many moments I thought, man, it’s just not happening for me,” said the five-time U.S. Open champion. “It was just a very disappointing match for me.”

Roddick made his final appearance at Arthur Ashe Stadium when he lost to Juan Martin del Potro in the fourth round, while Andy Murray and Maria Sharapova both dug themselves out of trouble to stay alive on a drama-charged day at the last grand slam of the year.

Only Serena Williams and Novak Djokovic had an easy time, both romping to comfortable victories to enhance their status as the favorites for the singles titles.

Djokovic was in complete control of his fourth round match against Stanislas Wawrinka, leading 6-4, 6-1, 3-1, when the Swiss called it quits in one of five matches that were held over from Tuesday because of rain.

“I really don’t know exactly what it was but by the look of it, I think it was probably a dizziness or something,” said Djokovic, the only man yet to drop a set in the tournament.

“He served well, he played well, but you could see that he didn’t feel great on the court.”

Sharapova needed all her fighting qualities to come from behind and beat Marion Bartoli of France 3-6, 6-3, 6-4 and reach the semifinals for the first time since she won in New York in 2006.

Bartoli led 4-0 overnight and wrapped up the first set when play finally resumed after another morning shower but Sharapova regained her composure to win the next two and book a semifinal against world number one Victoria Azarenka.

“It’s so long since I’ve been back to this stage at the U.S. Open. A little bit of luck always helps,” the Russian said.

Williams, full of confidence and self-belief, demolished Serbia’s Ana Ivanovic in less than an hour to raise hopes of an American winner after Roddick departed.

“I feel like I’m going to get more focused and serious and start playing Serena tennis in the next couple of rounds, if I get to play two rounds,” she said.

“A quarterfinal with your best friend, of course, is difficult,” said Errani. “We know each other very well, we’ve played together many times, so it was strange to see her on the other side of the net.”

The Scot lost the opening set then fell two service breaks down at 5-1 in the second, before rallying back to win, reeling off the last 11 games in a row.

“It wasn’t the best of starts,” Murray said. “He got nervous towards the end of that [second] set once .?.?. then I played a great match after that.”