Creditors may save Ssangyong’s bacon

Creditors may save Ssangyong’s bacon 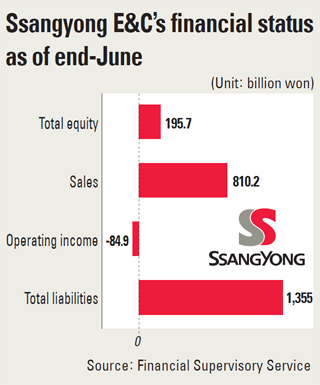 Ssangyong Engineering & Construction will likely avoid court receivership as its largest shareholder and creditors are ready to inject 200 billion won ($176 million) to tackle a liquidity crisis.

“The plan has not yet been finalized, but the creditors share the same opinion about what kind of support the company needs,” said an official from Kamco.

Ssangyong, the nation’s 13th-largest builder in term of construction capacity, has been struggling with financial problems since it was hit by the global financial crisis in 2008 and a number of poorly managed businesses financed by real estate projects.

Kamco has tried to offload the builder five times but was, on each occasion, unable to agree terms with bidders. The most recent bidder was fashion retail giant E-Land, which threw its hat in the ring last month before walking away.

Ssangyong is the largest domestic builder that is not affiliated with any conglomerate. The company posted sales of 1.7 trillion won last year. It works with almost 1,400 SMEs.

“The impact of Ssangyong going bankrupt would be huge, impacting the whole industry,” said Kim Sun-duk, head of Construction Industry Strategy Research, a local institute. “It will make the public realize that only conglomerates can survive in the construction industry.”

Industry watchers say Ssangyong is making moves to restore itself to financial health.

The builder is bidding for overseas construction projects worth a total of $9.6 billion. It has already ditched nine project-financed construction deals in first half of this year that were seen as major money losers. Additionally, it ramped up its marketing efforts to reduce its inventory of unsold properties - many of them residential - from 3000 in late 2007 to 370.