Lumia could be final nail for Nokia as investors balk

Lumia could be final nail for Nokia as investors balk 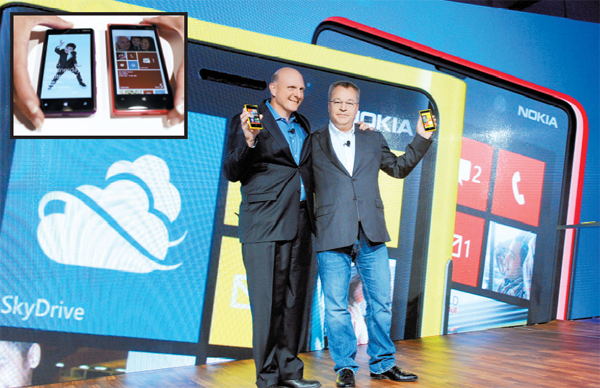 Nokia and partner Microsoft showcased the Lumia 920 phone on Wednesday in what may be their last major shot at reclaiming market share lost to Apple, Samsung Electronics and Google.

Microsoft and Nokia hope the device - sporting bright colors from red to yellow, a bigger screen, and technology that reduces blur and shakiness in pictures and video - will become a potent weapon in an escalating global war to dominate the mobile industry.

But investors said it lacked “wow” and some analysts said Nokia’s reticence about dates, prices or carrier partners also did not help.

Nokia shares traded in Helsinki began sliding midway through the New York launch and ended down 13 percent at 1.99 euros, their biggest single-day loss since June. But the stock had gained 67 percent since mid-July as anticipation built ahead of Lumia’s unveiling.

Its U.S.-listed stock closed down 16 percent at $2.38. Many of the industry analysts who saw the phone up close in New York deemed it a solid device with a few differentiating features. But it did not push the envelope as Nokia CEO Stephen Elop had promised.

“The challenge is that the world is working on the fourth, fifth and sixth editions of their devices, while Nokia is still trying to move from chapter one. It still has quite a bit to catch up,” said RBC analyst Mark Sue.

The Lumia was the first in a flurry of planned mobile-device launches expected ahead of the holiday shopping season. Google’s Motorola Mobility also showed off three new smartphones based on Android software on Wednesday. Verizon Wireless, the largest U.S. mobile provider, committed to sell all three of the Motorola phones.

Nokia announced no partnerships with wireless service providers, leading some analysts to worry this was a sign of weak carrier support. The Finnish handset maker said it would announce pricing and roll-out dates for the new Lumia later on a country-by-country basis.

“It is impossible to assess this launch without price and roll-out info. This is disappointing,” said Bengt Nordstrom, CEO of telecoms consultancy firm Northstream.