STX Offshore & Shipbuilding has won an order for an offshore oil storage facility, confirming its ability to build high-value-added facilities. 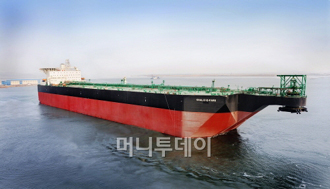 The country’s fourth-largest shipbuilder said Wednesday that it clinched a 500 billion won ($441 million) contract to build the facility with a North African oil firm. It did not reveal the name of the buyer.

The company will construct what is known as a floating, storage and offloading (FSO) unit.

It said that although it has proven its ability to construct high-value-added offshore plants like floating production, storage and offloading (FPSO) facilities, it has struggled to make a name for itself in the FSO market, which is dominated by larger shipbuilders like Hyundai Heavy Industries, Samsung Heavy Industries and Daewoo Shipbuilding & Marine Engineering.

The FSO is designed to store oil or natural gas and can be towed to different locations. The unit, measuring 324 meters (1,062 feet) in length and 51 meters in width, is 3.5 times bigger than a football stadium. It will be able to store up to 1.5 million barrels of crude, according to STX Offshore. This is equivalent to 70 percent of Korea’s daily requirement.

The shipbuilder delivered a 2.2-million-barrel FSO to a Middle Eastern oil company early this year, making this just its second contract in this market.

“This shows how our first project was a success, both in terms of construction and delivery, paving the way for STX to play a bigger role in the market for global offshore facilities,” said an employee at the company.

“Following our reputation as the world’s best drillship builder, STX is now being recognized for its outstanding FSO facilities,” he said. “We will try building bigger offshore facilities like floating liquefied natural gas and FPSO units.”

The company has not yet won an order for an FPSO that is capable of both producing and storing crude and natural gas.