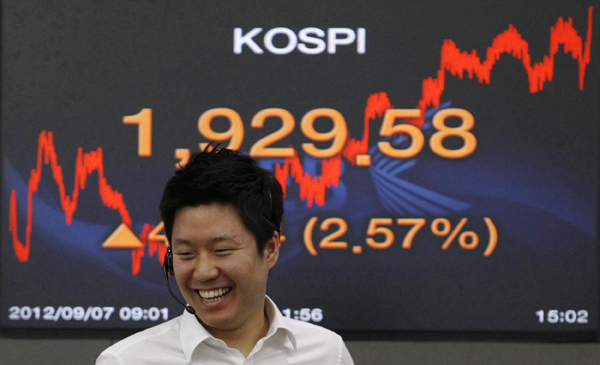 The Kospi closed at 1,929.58 yesterday, up a total of 48.34 points from the previous day, buoyed by the European Central Bank’s decision to buy bonds on open markets of countries that ask for help. [REUTERS/YONHAP]


Seoul’s main bourse shot up yesterday in response to the European Central Bank’s ambitious move to help debt-ridden Spain and Italy by buying bonds in an effort to prevent the two troubled European economies from collapsing.

The Kospi opened about 37.12 points higher than the previous trading session and maintained its upward momentum throughout the day as foreign investors went on a buying spree, their spirits raised by seeing the ECB execute its boldest move since the euro zone crisis resurfaced.

The market closed at 1,929.58, up a total of 48.34 points from Thursday, while the local currency rose against the U.S. dollar. Stock markets around the world also rallied from the news.

The buoyant index also reflected Thursday’s surprise upgrading of Korea’s credit level by Fitch Ratings from A+ to AA-, the agency’s fourth-highest ranking.

According to the announcement by ECB President Mario Draghi, the central bank will buy bonds on open markets of countries that ask for help, and will not set any limits on purchases.

Countries that seek assistance must agree to the conditions laid down by the $630 billion euro zone rescue fund, also known as the European Stability Mechanism (ESM). The ESM will purchase bonds directly from approved governments.

The main purpose of the bond-buying program is to push down interest rates in countries like Spain.

The ECB program “will enable us to address severe distortions in government bond markets which originate from, in particular, unfounded fears on the part of investors of the reversibility of the euro,” Draghi said at a press conference in Frankfurt.

“Under appropriate conditions, we will have a fully effective backstop to avoid destructive scenarios with potentially severe challenges for price stability.”

Draghi also announced the bank will keep the benchmark interest rate at its record-low level of 0.75 percent.

The ECB will buy bonds with three-year maturities or less. It will use a strategy called “sterilization,” in which the central bank will release as much money from circulation as it buys bonds with the intention of avoiding sparking inflation.

However, analysts point out that the bond-buying program is no magic pill.

“The ECB will be able to freely intervene in the bond market, relieving worries about a possible break-up of the euro zone,” said Cho Byung-hyun, an analyst at Tong Yang Securities. “But it is too early to celebrate because, while the ECB’s sterilization method can keep a lid on inflationary pressure, it can’t give economies a boost.”

“Buying bonds without any limits is attractive enough to satisfy the market, but the sterilization strategy will only go so far in terms of helping effect a recovery,” said Yoo Shin-ik, an analyst at HMC Investment & Securities. “Potential opposition from Germany also needs to be dealt with.”

The bailout fund is expecting a ruling next Wednesday by the German Constitutional Court so it can be integrated into German law. Experts say such a constitutional change may require months of debate.

Park Sang-hyun, an analyst at Hi Investment & Securities, said the latest action will only have a short-term effect on the global bond market.

“Draghi will have to watch carefully if the countries that the bank buys bonds from fulfill their requirements to get the bailout fund.”

Meanwhile, Minister of Strategy and Finance Bahk Jae-wan welcomed the news yesterday, saying the ECB’s step came at an opportune time when uncertainties are growing.

“This fall will be full of economic uncertainties, but the ECB’s action comes as very welcome news that could help reduce these risks significantly,” he said. “It will move the global economy in a desirable direction for a while by stabilizing market confidence.”

He also expressed confidence in the Korean economy’s ability to weather the global turmoil, as he made remarks about Fitch’s upgrading of the country’s credit rating.

He noted that the country is still facing difficulties triggered by the euro zone debt crisis, including faltering exports for the last two months.

Meanwhile, stock indexes in the U.S. jumped to their highest levels in more than four years, while Treasuries fell as the ECB announced the plan and reports fueled optimism in the U.S. economy.

“The market was looking for signs that the ECB and some part of the European Union would basically stimulate in Europe and guarantee the sovereign debt,” David Pearl, who oversees $24 billion in assets as co-chief investment officer at New York-based Epoch Investment Partners, said in a phone interview.

“Draghi pretty much gave what the market was looking for. The U.S. data is at least moving positively and we’re in a recovery.”