Korea will seek to develop shale gas as a new major source of energy and expand the country’s imports of the new fossil fuel to 20 percent of all natural gas imports by 2020, the government said on Thursday.

The country will also take part in overseas development projects to further improve its energy self-efficiency, with shale gas accounting for 20 percent of its self-developed energy supplies in 2020, the Ministry of Knowledge Economy said. 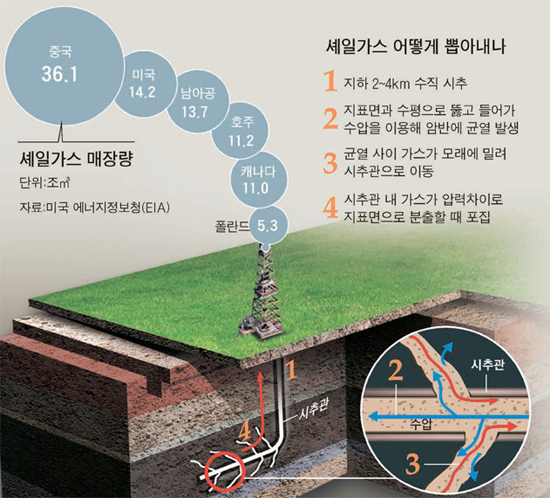 The move comes as shale gas is opening up what the ministry’s vice minister, Cho Seok, earlier called “a new golden age of natural gas.”

“Shale gas certainly has the potential to become a future source of energy,” he told a press briefing. “It is clear that the importance of natural gas is growing and will continue to grow in the future.”

Shale gas is a kind of natural gas deposited in shale formations. The existence of such a fossil fuel has been known at least since the 19th century, but it was considered uneconomic as shale formations are usually found at much lower depths than conventional natural gas, and its extraction requires a difficult and expensive process known as hydraulic fracturing.

However, with dwindling natural gas reserves, along with recent technological developments enabling the fracturing of shale formations, shale gas is now considered a new important source of energy with abundant reserves worldwide.

Cho also noted an indirect benefit the country may enjoy from the development of shale gas.

“We cannot say shale gas is the only answer, but its development may cause a balloon effect, causing the price of liquefied natural gas to drop along with the amount of money we spend on gas imports,” he told reporters.

The vice minister said that increased imports of shale gas may not warrant an immediate cut in the energy supply rate of nuclear power plants, a source of recent concerns over safety, but noted that the country will have to revise its long-term energy supply plan.