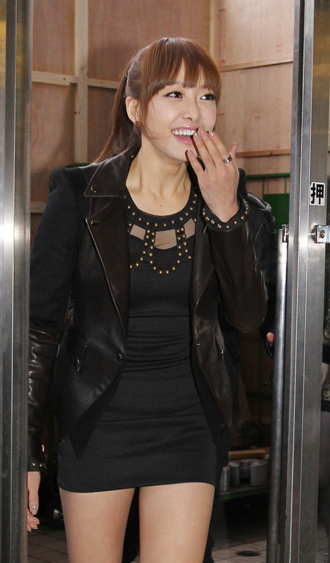 The Chinese drama featuring f(x)’s Victoria and Super Junior M’s Zhou Mi has become the No. 1 program in its time slot.

According to research company CSM, episodes 13 and 14 of “When Love Walked In,” which aired on Monday, attracted 0.902 percent of viewers, making it the most-watched show at the time.

On the following day, episodes 15 and 16 did even better with 0.987 percent of viewers watching.

The 30-part drama was shot early this year and is being dubbed a “contemporary Cinderella story.” It began airing on GTV from late August.

Zhou plays the role of a wealthy heir while Victoria plays his love interest who forms a love triangle with Zhou and Chinese boy band Fei Lun Hai’s Calvin.

Victoria has starred in variety shows in Korea, her most prominent stint being on the mock reality show “We Got Married” last year, in which she was paired up with fellow K-pop artist Nichkhun from 2PM.

“When Love Walked In” is the 25-year-old K-pop star’s first serious acting role.
By Carla Sunwoo