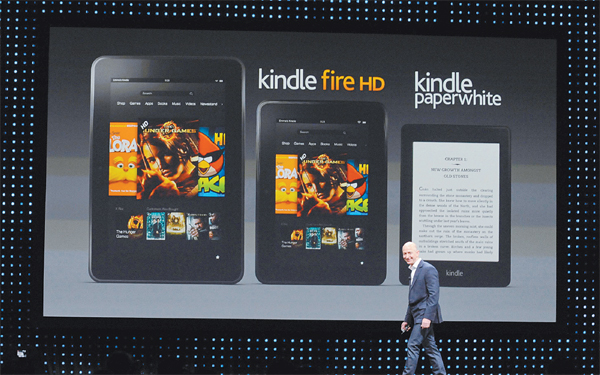 Amazon CEO Jeff Bezos walks off after unveiling the Kindle Paperwhite and the Kindle Fire HD in 8.9-inch and seven-inch versions during Amazon’s Kindle Fire event in Santa Monica, California, on Thursday. [REUTERS/YONHAP]


Amazon unveiled four new Kindle Fire tablet computers on Thursday, including ones with larger color screens, as the online retailer steps up competition with Apple ahead of the holiday shopping season.

Amazon showed off the larger Kindle Fire with a high-definition display amid expectations that Apple will introduce a smaller iPad as early as next week.

The larger Fires will have screens that measure 8.9 inches diagonally, compared with 9.7 inches for the iPad. The original Fire had seven-inch screens. The basic version of the larger Fire will sell for $299, or $100 less than the cheapest iPad.

“It’s very clear today that there are two names in the market for tablets. One is Amazon and one is Apple,” said Carolina Milanesi, research vice president at Gartner.

Seven out of every 10 tablets sold in the second quarter were iPads, according to IHS iSuppli. Tablets using Google’s Android OS have not been able to carve out a significant stake in the market. Amazon is trying to change that with the new Fires, which run a modified version of Android.

Amazon has been selling lower-priced tablets at thin, if any, profit margins to boost sales of digital items from its online store. As a result, it has been able to compete with the iPad on price.

CEO Jeff Bezos said in an interview backstage that Amazon won’t lose money on the devices even if customers don’t use them to buy digital content from its online store.

“We want people to buy content from the device, sure,” he said. “We’re fine if they don’t.”

The basic, seven-inch Fire model will cost $159, down from $199 for the original model, which sold out last month. Amazon says it is 40 percent faster, comes with twice the memory and has a longer battery life than the old version. It will start shipping next Friday.

“I want one,” BGC Partners analyst Colin Gillis said about the $159 Kindle Fire. “It’s a great price, and it’s certainly not something that’s going to be making money for them initially. It’s great for consumers. How great a business strategy [it is] for Amazon remains to be seen.”

Amazon’s bread-and-butter is not its Kindle gadgets but the movies, books and music that people consume through them. By contrast, Apple sees content sales as a sideline and wants to make a healthy profit on every device sold. For example, the cheapest iPad costs $399 and the most recent models start at $499.

But Amazon signaled Thursday that it is going head-to-head with Apple when it unveiled its high-end Kindle Fire HD. It will have two Wi-Fi channels and two internal antennas for faster, smoother transfers. That will be crucial for high-definition movies and other large files, Bezos told reporters.

The HD model will also have more storage, starting at 16 gigabytes - the same as the iPad - compared with eight gigabytes for the old Fire. About two gigabytes is taken by the Fire’s operating system.

The Fire, however, won’t have as extensive a selection of apps as the iPad. In addition, while the HD models will have a front-facing camera for video chats, the iPad has one on the rear as well for taking photos and video.