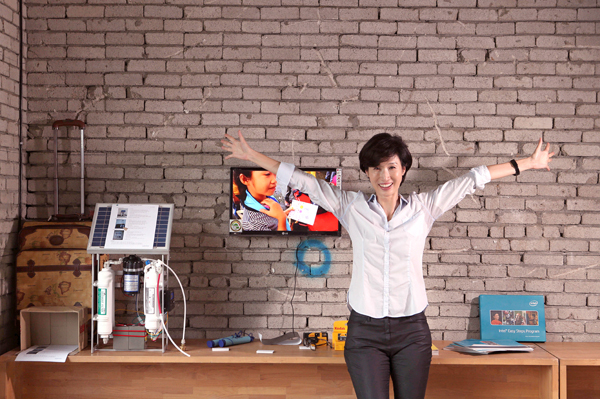 The three-story building with a large front yard will be a “place that cultivates innovation,” according to Roh.

Select fellows will be invited to conduct their “dream projects” on a range of topics, from the arts to economics, engineering and social sciences. They can research, collaborate and receive financial support at the center.

The 51-year-old, who has been running the new media art center Nabi since 2000, said she wanted to offer an open space for innovative people in hopes of discovering creative talents like Steve Jobs, the late co-founder of Apple.

Roh said she will donate most of her wealth to the program. Although detailed plans have not been announced yet, the former professor of Kyung Hee University said she will try to turn the office into public property.

“I thought there are many Koreans who are creative and have great artistic sense, but art education institutes just can’t catch up to their pace,” she said. “This is not a restricted place for artists, but open to all people.”

Roh said that starting this fall, it will enter the process of selecting talents to run projects. In the first year, the center will pick two people and provide an annual fellowship of 50 million won ($44,000), but will expand the recruitment scale later on.

“Age and education levels are not barriers when applying,” she said. “Koreans are priority candidates, but I hope people from various parts of the world come here, too.”

Roh, who previously served as the director of the Incheon International Digital Art Festival, said that creativity is essential for this generation. She said that digital culture is erasing the boundaries of school systems and people have become active in educating themselves.

“We live in a world where one genius like Steve Jobs can change the rules of the game with imagination,” she said. “Probably most artists who work here will not be like Steve Jobs, but I believe those who watch these artists closely could become next Steve Jobs.”

When asked why she opened the place this fall with her husband Chey currently on trial for embezzlement, Roh said that social contribution was always inside her heart and it was never an abrupt decision.

“I learned that you will regret when you hesitate or don’t go where you’re supposed to go,” she said. “This is the right time for me to carry out the project.”