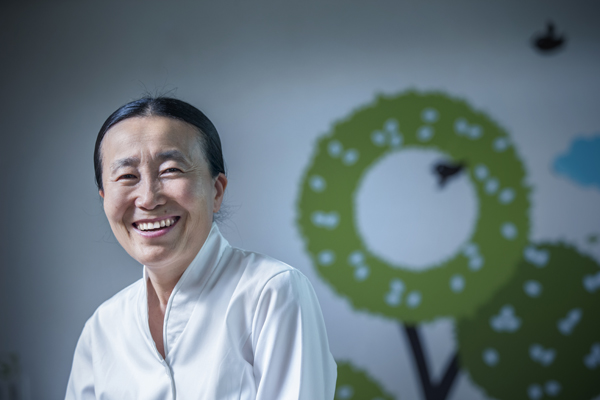 “For the benefit of Won Buddhism in America, we are currently seeking a Won Buddhist monk who is native to the country,” says Kim Bok-in, above, the president of the Won Institute of Graduate Studies in Philadelphia. By Park Jong-keun


Kim Bok-in is both the president of the Won Institute of Graduate Studies and gyomu of the religion herself. The word “gyomu” refers to a monk of Won Buddhism, the indigenous religion founded in Korea in the 20th century that has been described as a fusion of Buddhism, Confucianism and Daoism.

After graduating with a degree in Won Buddhism from Wonkwang University in 1979, Kim flew to America and received a doctorate degree in religion, focusing on the “unification of religions in a multi-religious era” at Temple University.

While Kim worked as a professor of religious studies at Gettysburg College for four years, she became involved in the launch of the Won Institute of Graduate Studies. After being employed as the dean of academic affairs, Kim was appointed president of the graduate school last August.

This year, the Won Institute of Graduate Studies marked its 10th anniversary. The JoongAng Ilbo recently met with Kim, who was visiting Korea to raise donations for the graduate school.

Q. The school recently marked its 10th anniversary. How would you assess its accomplishments?

A. We first started out in the basement of a Won Buddhist center in Philadelphia. I had heard that Harvard University started off in a basement of some church as well. I don’t want the school to be only devoted to the studies of Won Buddhism, but I want it to become a place that teaches everything. Our institute received various qualifications because right from the start, we did our best to match the U.S. government’s standards of quality teaching.

With these qualifications, our school was then able to exchange credits with other schools and take part in student loan programs. In 2008, we received the “Excellent Institution of Higher Education” diploma. Two years later, we were accredited with an acupuncture certification, and now, graduates can apply for an American acupuncture qualification.

We wouldn’t make all these efforts if we were to only admit Korean students. The Won Institute of Graduate Studies is a Korean school that is unparalleled in America.

What is the reaction of local residents?

In the past, those who were enrolled in the course on Won Buddhism, which trains future Won Buddhist gyomu, were almost all Korean, except for one second-generation immigrant. Now, there are currently two local Won Buddhism students, and I think sooner or later, a local gyomu will emerge.

What is the present day reputation of Won Buddhism in America?

In America, Buddhism is everywhere. The Japanese Zen, Tibetan Buddhism and now various Buddhist sects such as those that have originated from Vietnam, Cambodia and China are being introduced. People choose religions as if they are shopping.