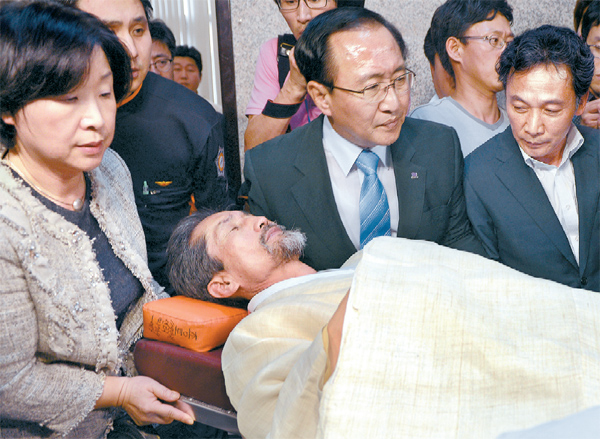 Kang Ki-kab, chairman of the Unified Progressive Party, is moved onto an ambulance yesterday after he presided over a lawmakers’ meeting to expel four proportional representatives. Kang was exhausted due to a hunger strike he staged for the past five days to push for party reform. [NEWSIS]


A split in the opposition Unified Progressive Party has begun after the party’s leadership expelled four proportional representatives to the National Assembly, who will ultimately be the core of a new political party.

The faction that controls the party held a meeting at the National Assembly yesterday, and the Supreme Council expelled four lawmakers: Park Won-seok, Seo Gi-ho, Jeong Jin-hu and Kim Je-nam.

The four held a press conference earlier yesterday and stated that they will follow the party’s decision in order to continue the reform of progressive politics. They will also keep their seats in the Assembly. 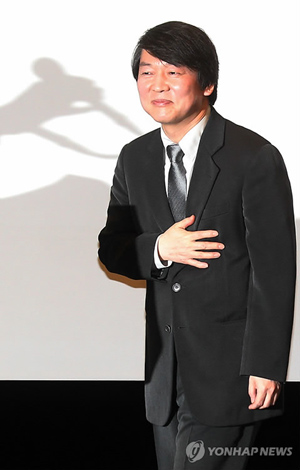 Later, more lawmakers are expected to defect from the party and unite with the four expelled lawmakers to form a new party. Then, a much reduced UPP will be left to its pro-North Korea faction.

The expulsion was approved by seven of the 10 participating lawmakers. The remaining three, who belong to the pro-North Korea faction, abstained.

Under the law, incumbent proportional representatives lose their seats if they voluntarily quit a party, but can maintain them as independent lawmakers if they are expelled from a party.

The four lawmakers in question participated in the voting and voted to expel themselves from the party.

“We have agreed to accept the expulsion in order to continue our reforms for progressive politics,” Park said. “We promise to the nation that we will organize a new and truly progressive group as soon as possible.”

The last step to becoming independent lawmakers for the four is to submit documents approved by party chief Kang Ki-kab to the National Assembly speaker and get approval from him.

However, the pro-North Korea faction is likely to challenge the expulsions.

“They are trying to maintain their positions as lawmakers in an unreasonable way,” said lawmaker Lee Sang-gyu of the faction.

A day before the voting, the pro-North Korea faction held a committee meeting and revised the party’s regulations on expulsions, requiring a two-thirds vote of the party’s lawmakers.

But the split of the UPP is expected to quicken as other lawmakers prepare to quit, including Roh Hoe-chan, former co-chairwoman of the party, Sim Sang-jeong and Kang Dong-won.

“[A split] became a reality we will not be able to avoid,” Kang Ki-kab said yesterday.

The two are from the pro-North Korean faction. They refused to relinquish their seats.