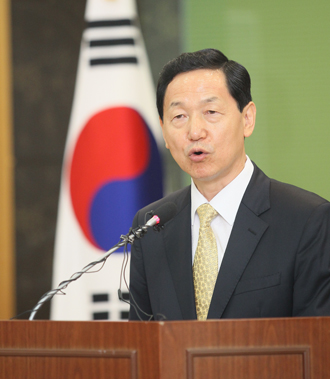 The education chief in Gyeonggi Province ordered high schools to erase mentions of violence from records of seniors applying to college, directly contradicting orders from the Ministry of Education. School principals don’t know which orders to obey.

Kim Sang-kon, Gyeonggi’s education superintendent, convened a meeting Thursday with education officials including principals of 103 high schools that have students with records of bullying.

Kim reiterated his stance that he will not permit schools under his authority to submit student records of violence to colleges that students apply to. Kim ordered the schools to delete any record of school bullying.

In response to Kim’s campaign, the Ministry of Education, Science and Technology formed a special audit team on Aug. 28 to urge schools to follow its directive to keep mentions of bullying in students’ records and not delete them.

The ministry warned high schools that those found in violation of the directive will face punishment. The ministry instructed schools to send in copies of records of bullying to the ministry by Monday.

The ministry’s policy of recording histories of violence in students’ records, which began in January, is meant to curb bullying in schools, which led to a series of suicides. But liberals in the field of education think it goes too far and harms students’ futures.

School principals are now sandwiched between the conflicting orders.

“I have received nearly 20 official documents from the two organizations since August urging me to follow through with their respective orders,” said the principal of a high school in Suwon, Gyeonggi. “I told the ministry’s special audit team that I told teachers to document bullying histories, when in fact I have yet to do so.”

Another education official involved in the issue told the JoongAng Ilbo that “schools are closely watching the situation unfold as tensions between the two are at its highest these days.”

Yesterday was the last day for school principals to approve student reports to be submitted for early college admissions.

Some liberal principals and regional education chiefs are ignoring the ministry’s directive following a recommendation by the National Human Rights Commission last month that the ministry come up with complementary measures to avoid possible infringement of student rights.

One of the recommended measures includes a redemption system in which students with bullying records could have them expunged if they showed improvement in their behavior.