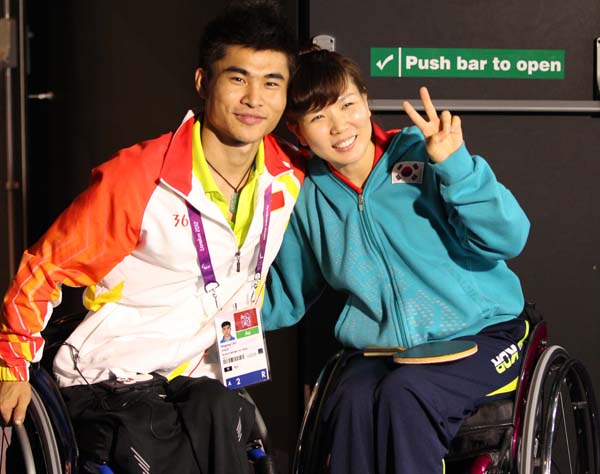 Moon Sung-hye, right, poses with her fiance, Chinese table tennis player Cao Ningning, after announcing they plan to wed after the London Paralympics.[YONHAP]


As if the London Paralympics were not inspiring enough, consider the story of a Korean woman and Chinese man who share more than table tennis skill and physical disabilities.

Moon Sung-hye, 34, disclosed on Saturday that she has long been dating Cao Ningning, 25, and the two plan to get married after the Paralympics. Both are paralyzed below the waist.

Moon followed the announcement by winning a bronze medal on Saturday as the Korean women’s team beat Serbia. Moon, along with Jung Ji-nam and Jung Young-a, won 3-1.

Moon and Cao developed a friendship through overseas competitions going back to 2006 and they became serious last year, Korean officials with knowledge of the relationship told Yonhap News Agency.

The officials told Yonhap that Cao was taken with Moon when he saw her for the first time at the 2006 Paralympic Asian Games in Kuala Lumpur, Malaysia. Moon was not aware of Cao until the 2007 Table Tennis Slovakia Open, during which Cao went and told Moon he had cheered for her during the Asian Games the previous year.

The friendship was formed between the two immediately, but blossomed last year when Moon went to China for training and met Cao afterward, according to Yonhap.

Moon said she learned Chinese in order to talk with Cao.

Moon said Cao already introduced her to his parents. Cao will meet Moon’s parents after the London Paralympics. A wedding date has not yet been set, but ceremonies will be held in Korea and China, she said.

“When I went to China to meet Cao Ningning, he treated me as if I were queen and my feeling grew bigger toward him,” Moon said. “My mother likes Ningning.”

The Paralympics are set to end its 12-day run with the closing ceremony early this morning Korean Standard Time.