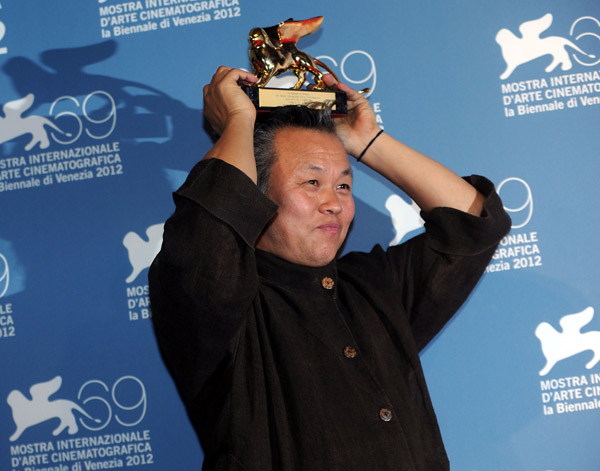 
Kim Ki-duk’s “Pieta,” a mother-and-son drama with a violent streak, won the Golden Lion award for best film at the 69th Venice Film Festival Saturday, the first time a Korean director has claimed the top prize at a major film festival.

The director also is the first Korean to win prizes at the Venice, Cannes and Berlin international film festivals.

Kim’s bleak tale received a rare standing ovation after its screening and was chosen by judges over the 17 other films shown in Venice.

Instead of an acceptance speech, the 51-year-old director sang “Arirang,” a traditional Korean song and the title of a cinematic self-portrait that recounts Kim’s struggles as a director and sometimes troubled relationships with colleagues. He described “Arirang” Saturday as “the answer to my questions throughout life.”

“I express my endless thanks to all actors, actresses and staff who took part in this movie,” Kim was quoted as saying by Yonhap News Agency. “I also would like to honor all of you who chose ‘Pieta.’ ”

When asked how he felt about receiving the award, he picked up the Golden Lion and kissed it. 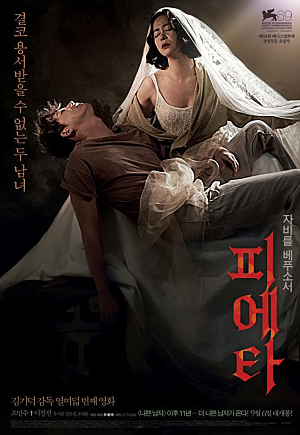 Tears rolled down the cheek of an emotional Jo Min-su, the lead actress in “Pieta,” as she expressed how happy and proud she was that a Korean film received the top prize for the first time.

During the festival’s closing ceremony, lead jurist Michael Mann said the Korean movie stood out because it “seduced you viscerally.”

Kim’s 18th film, “Pieta,” tells the story of a ruthless debt collector (played by Lee Jung-jin) who cripples debtors who fail to pay up by injuring them for the insurance money.

The brutality of his day-to-day life is interrupted by the appearance of a woman (Jo Min-su) who claims to be his mother. He struggles for redemption as an enormous secret between the two unravels.

Taking its name from Michelangelo’s famous statue of Mary cradling the body of Christ, the prolific director said the movie is intended to be a condemnation of “extreme capitalism,” describing money as the film’s “third protagonist.” 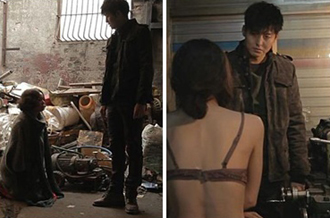 He also injected aspects of religion into the movie. “Religion is so closely connected to humans and I think if anything, this element of existence should be expressed through love,” he said at a July press conference at Seoul Anglican Cathedral. “I think sex, in a way, is a prayer of sorts, so instead of dichotomizing the two [sexuality and religion] I think of the elements more as a singular chunk of our lives.”

Although his films have not been commercial successes in Korea, they have been well received by critics abroad. “My works are introduced as commercial movies, not art, outside Korea,” Kim said in July. “I don’t know why Koreans seem to have trouble understanding my films.”