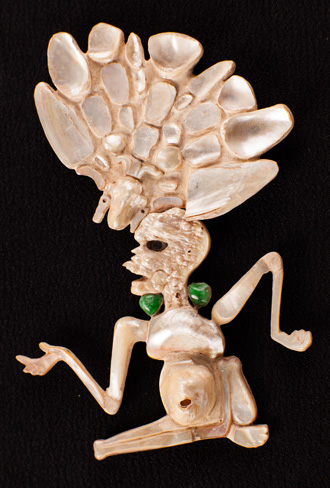 Above, an ornament from the Mayan civilization dating from the seventh to eighth century.

Perhaps the spike in interest in the Mayan civilization this year has much to do with the world’s supposed end. According to the Mayan calendar, we are all doomed come Dec. 21.

The Mayans are believed to have lived for 3,000 years from around 1,500 B.C. in the Mesoamerican region and are known to have established a sophisticated civilization with a written language and advanced mathematical and astronomical systems.

They built elegant structures without using wheel-based methods or metal tools, and the civilization is well known for its precise, articulate calendar based on their astronomical prowess.

The National Museum of Korea kicked off its “Maya 2012” exhibit on Tuesday, focusing on the great Mesoamerican civilization.

It is also the seventh installment of the museum’s ongoing series exploring some some of the world’s best-known civilizations, which stared in 2008 with the “Glory of Persia” exhibit. In 2009, the featured exhibition was “Pharaohs and Mummies” in 2009, which featured antiquities from ancient Egypt.

Earlier this year, the museum presented “The Civilizations of Turkey: Emperors in Istanbul.”

Visitors to the current exhibit can enjoy about 200 items from Mexico and Guatemala. Officials at the National Museum of Korea say it is rare to see such a large number of Mayan items from the two countries at one event.

An incense burner resembling Kin, the Sun God; a cylinder-shaped earthenware featuring a Mayan calendar; an artifact from the Classical Period (300-900) depicting a ritual. Provided by the museum


Attracting much attention at the exhibition is an incense burner shaped like Kin, the sun god. Mayans believed that the world was rectangular and many gods lived in the sky, including Kin, while the gods of death lived underground.

On display are incense burners in likenesses of death gods as well as others that resemble animals that were believed to symbolize gods, like jaguars, rabbits and frogs.

Other highlights are Mayan calendars and astronomical materials.

The Mayans adopted the so-called Mesoamerican Long Count calendar that based eras on a 5,125-year-long cycle. Some scholars have interpreted what’s written on some Mayan antiquities as indicating that the world will come to an end Dec. 21.

But Yang Seong-hyeok, a researcher at the museum who planned and organized the exhibition, sees it differently. “Based on many documents and relics, the Dec. 21, 2012, date should be viewed as a rebirth or the start of a new era,” he says.

The Mayan civilization was smaller and more modest compared to other in the Americas, such as the like Incan or Aztec.

Yet the Mayans were behind the making of exquisite texts, sculptures and music, many of which are on display at the National Museum.

This is the first edition in the civilization series that the National Museum of Korea has planned and organized on its own.

For that reason, the museum will not charge for admission to the exhibition.

* “Maya 2012” is being held at the Special Exhibition Gallery in the Permanent Exhibition Hall of the National Museum of Korea.

It runs until Oct. 28. Admission is free.

The museum is open until 9 p.m. on Wednesday and Saturday; 7 p.m. on Sundays; and 6 p.m. on Tuesdays, Thursdays and Fridays. It is closed on Monday.