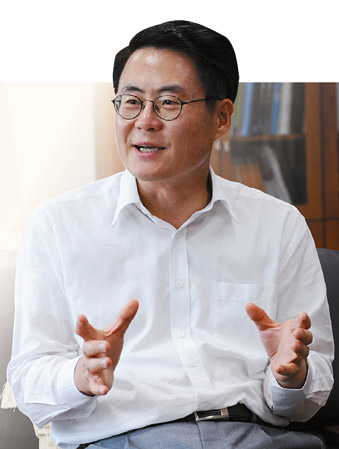 President Kim Jae-soo of Korea Agro-Fisheries & Food Trade Corporation believes exports of agricultural products will be a “game-changer” for the country’s agricultural industry.

He calls for more research efforts to develop high-quality processed food products to sell overseas. Kim supports the Korea-China free trade agreement, which will let in cheaper Chinese agricultural products that can be turned into high-value-added products with the help of Korean technology.

The government official-turned-CEO of the quasi-governmental organization sat down with the Korea JoongAng Daily last week to share his three decades of experiences in the agricultural industry.

Q.Do Korean agricultural products have a competitive edge over those from other countries in terms of export?

A.It is hard to find competitive edges among agricultural and fishery products. I propose exports of those products as a strategic method to stabilize domestic supply and demand. Some people criticize exports of agricultural products, asking why the government sells our food abroad even though we don’t have enough to consume.

It doesn’t work that way. There are not many countries, including Korea, that sell their agricultural products simply because there are surpluses. We are always short on grains, vegetables and other fresh food, but we use exports as a means to adjust domestic prices.

When too much fruit is produced accidentally, prices plunge immediately because domestic demand doesn’t change. In such cases, we can think of exporting the excess, which will help us prevent declines in domestic prices and maintain profits.


What is your primary goal?

My goal is to make the country’s agricultural exports reach $10 billion this year. Looking back at the country’s trade history, its total exports barely hit $10 billion in 1977. But since then, the country’s exports grew exponentially to $550 billion last year. Before the country opened its market to the world, we blocked imported goods in preference of home-grown products.

However, after the market was opened, producers started to improve the quality of their products to make them sell well abroad, leading to an overall improvement in the quality of Korean-made products.

I believe once exports of agricultural products reach $10 billion, we don’t have to worry about what happens next. I guarantee the quality will be improved significantly and the processed food sector will also gain momentum. Exports, in a nutshell, will serve as a game-changer for the local agricultural industry.

What is the most competitive agricultural export item?

Unfortunately, Korea doesn’t have a flagship export item. Ginseng has the potential because Korea is its place of origin. But we haven’t made enough efforts to develop its potential. Although we are the original producer of ginseng, we sold only $190 million worth of the product last year, which is a poor record for a representative product.

We can’t exploit the competitive edge of being the original ginseng producer with unique climate conditions. We’ve already lost ground to China in ginseng exports. So, we need to ramp up efforts to develop differentiated ginseng products. Domestic consumption of ginseng is also low. It is urgent to increase consumption and popularity of the product in the local market in the first place.

How can Korean agriculture benefit from free trade agreements?

I am in support of a Korean FTA with China because we can make profits from selling high-quality processed food to the country. Of course, Chinese products will also make their way to Korea at cheaper prices. Let’s put our focus on developing a variety of processed food and selling them back to China.

Let in cheap Chinese red pepper. We will make pepper paste (gochujang) out of it. Exporting those products at higher prices is the key point.

Advanced countries like the United States rely on exporting agricultural products in bulk, because they have vast lands. But we don’t. We have only 1.71 million hectares of land where we can raise produce.

So, let’s put our efforts into developing food-processing technology. We need to take a more scientific approach, including biotech methods, rather than just promoting sales.

Currently, one of our top fishery exports is seaweed snacks. They are a case in point of successful transformation of fresh food into a processed form.

How do you view developments in the Korean agricultural industry?

The Korean agricultural industry has grown significantly, shifting from quantity-based to quality-based. Our agriculture began its development with the very basic mission to feed the people.

The country’s self-sufficiency rate for rice currently stands at 26 percent, which is quite high. No one is worried about running out of rice, because we have the technology to produce abundant amounts of rice that would sufficiently meet demand. After completing that mission, the core value of the agricultural industry has moved onto quality.

People pursue food for quality nowadays, and they are more likely to enjoy eating than merely appeasing their hunger. The government and agriculture-related agencies are making consistent efforts to improve the quality of home-grown rice, and actually there has been significant progress.

But we still have a long way to go in order to produce rice that is palatable, sufficient in amount and has resistance to climate change. We need more research on that.