Murray a match away from first Grand Slam

Murray a match away from first Grand Slam 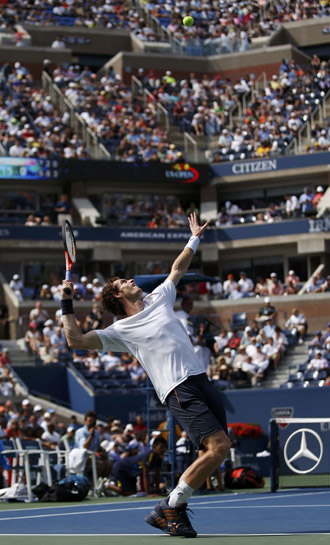 NEW YORK - It has been a season of firsts for Scotsman Andy Murray, who reached the Wimbledon finals and won the Olympic tennis gold medal at the All-England Club.

The last item on his 2012 wish list is now within tantalizing reach as Murray’s 5-7, 6-2, 6-1, 7-6 win in the U.S. Open semifinals bout on Saturday against Czech Tomas Berdych put him within one victory of becoming the first Briton in 76 years to win a Grand Slam men’s singles crown.

Not since Fred Perry claimed the U.S. nationals title in 1936 has a British man triumphed in a slam, and Murray can end that streak when he faces either defending champion Novak Djokovic of Serbia or Spain’s David Ferrer in Monday’s final match.

“It’s the last thing that I really want to achieve in my career,” said Murray, who has come up short in four previous Grand Slam finals.

His first championship match was at the U.S. Open in 2008 when he lost to Roger Federer, and his latest near miss came after a rousing final against Federer at Wimbledon, where he was the first Briton to play for the title since Bunny Austin in 1938.

The Scottish player returned to the All England Club the next month to sweep past Federer in the London 2012 gold medal match.

“Winning the Olympics did, for me, take a bit of the pressure off. I did feel a lot better after that. Maybe I had less doubts about myself and my place in the game just now.

“But winning a major is the last thing that I really want to do. It means a lot to me. You saw, obviously, at Wimbledon how much that meant to me,” Murray said about his emotional speech after having to settle for the consolation prize.

“It’s obviously not easy to lose another slam final, so I hope this one is a different story.”

Murray advanced to a second Grand Slam final for the first time in the same season when he prevailed over Berdych in windy conditions that bordered on unplayable.

Despite dealing with debris blown on the court, including a chair with towels and a bag sliding across from the sidelines, wind-blown service tosses and his own hat flying off in mid-point to the ultimate cost of a service break, Murray made only 20 unforced errors in the entire four-hour match.

Murray said he had learned a lot from his experiences over the years and treasured the opportunity for another crack at notching his first career Grand Slam title.

“The Olympics was the biggest win of my career by far. You know, it meant a lot to me, too,” he said. “Whatever happens in the [Open] final, it’s been a great year. But, you know, all I want to make sure I do in the final is that I give 110 percent.

“I know how hard these opportunities are to come by and I will give it everything.”

He was hailed afterward by some popular Scottish nobility during his news conference. Actor Sir Sean Connery interrupted the question and answer session following Murray’s victory on Saturday and waved in Manchester United coach Sir Alex Ferguson as the stunned player broke into a wide smile at the sight of Scotland’s most famous ambassadors.