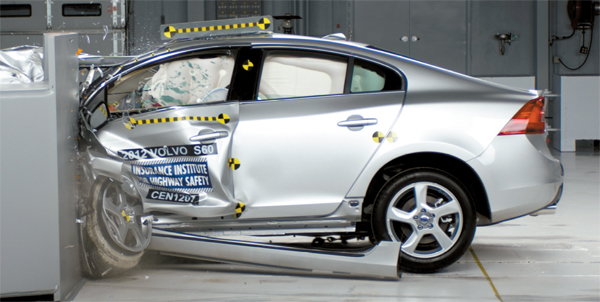 A Volvo S60 crashes into a 5-foot-tall rigid barrier in small overlap front test run by the Insurance Institute for Highway Safety. The new crash test is designed to replicate what happens when the front corner of a car collides with another vehicle or an object like a tree or utility pole.Provided by IIHS


A new crash test from the Insurance Institute for Highway Safety has put automakers on notice that standards are rising and they will have to produce safer vehicles.
The American nonprofit organization last month introduced the so-called “small overlap frontal crash test” to evaluate what happens to the front corner of a vehicle during impact. 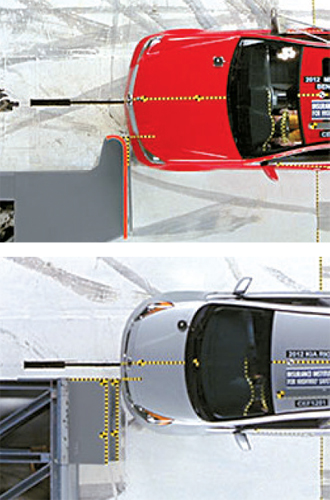 The new IIHS test differs from the moderate overlap frontal test, or frontal offset test, for which most vehicles now earn good ratings.

In this test, a vehicle travels at 64 kilometers per hour (40 miles per hour) and a crashes into a 2-foot-tall barrier. Forty percent of the width of the vehicle strikes the barrier on the driver’s side.

In the small overlap frontal test, cars travel at 40 miles per hour, but only 25 percent of the vehicles’ width strikes a 5-foot-tall rigid barrier.

The IIHS said the new crash test evaluates the outer edges that are not structurally well-protected by so-called “crush zones.” It also is a more rigorous test for airbags and seat belts.

The force of a crash in these types of collisions goes directly to the left front wheel, suspension system and firewall.

“This new test program is based on years of analyzing real-world frontal crashes and replicating them in our crash test facility to determine how people are being seriously injured and how cars can be designed to better protect them,” said Adrian Lund, president of the IIHS.

“We think this is the next step in improving frontal crash protection.”

Korea is considered to have high safety standards, but it does not conduct the small overlap frontal test.

But the Korea Automobile Testing & Research Institute, the only government-authorized safety institute, said it could conduct the test if a manufacturer requests it.

The new test yielded some surprising results, with many luxury models performing poorly.

Of the 11 models released this year, three earned passing grades. 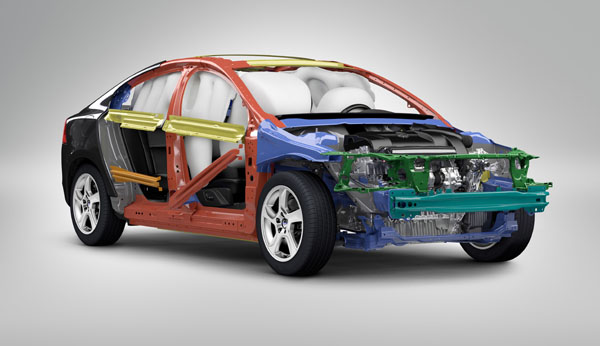 The IIHS said that Volvo S60 received the best rating among tested models as its upper frame rail has been tied back into the stiffer structure in the middle of the vehicle. Volvo said it has been running small overlap crash tests as part of its vehicle safety development program since the late 1980s.Provided by Volvo


The Acura TL and Volvo S60 earned “good” ratings, while the Infiniti G37 was deemed “acceptable.”

The Acura TSX, BMW 3 Series, Lincoln MKZ and Volkswagen CC were rated as “marginal,” while the Mercedes-Benz C-Class, Lexus IS 250, Audi A4 and Lexus ES 350 were “poor.”

Among those brands, only Acura, Honda’s luxury brand, is not sold in Korea.

Auto experts say a poor rating does not necessarily indicate a car is unsafe. Most models evaluated in the new test, including those that received marginal and poor ratings, were named 2012 IIHS “top safety picks” after other front, side and rear crash tests.

Nonetheless, automakers understand they must make safety improvements. “Manufacturers recognize that this crash mode poses a significant risk to their customers and have indicated they’re planning on structural and restraint changes to improve protection in small overlap frontal crashes,” Lund said.

No Korean cars have undergone the IIHS’s new test so far, but the institute has announced it will next evaluate moderately priced midsize sedans, which could include Hyundai Motor’s Sonata and Kia Motors’ Optima (K5 in Korea).

“Hyundai Motor Group should be thinking a lot about this test,” said Kim Pil-soo, a professor of automotive engineering at Daelim University College.

“Tests in the United States usually set an industry standard, and since Hyundai is selling a lot of their products overseas, they must be preparing for the new crash test.”

But Kim said the nation’s largest automotive group should not design cars just to pass a particular test.

As Hyundai is aiming to become a premium brand in the global market, achieving reliable vehicle safety will be a consistent challenge.

“It is going to take too much time to respond after new crash test measurements are revealed,” he said. “Hyundai should beef up its own car crash measurements always, so it can receive good results on any kind of test.”