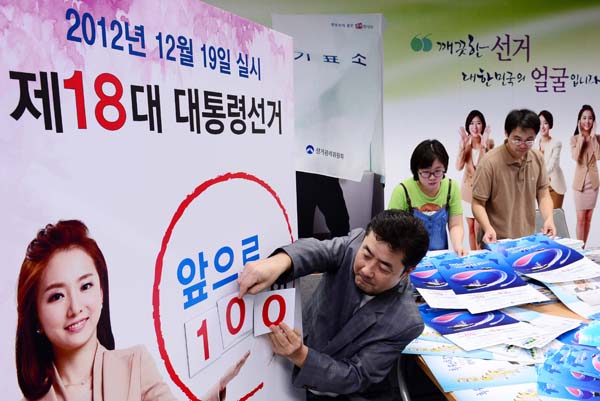 Staffers for the Seoul Metropolitan Election Commission prepare election leaflets and promotional posters yesterday. As of today, 100 days are left before the Dec. 19 presidential election.[NEWSIS]


With only 100 days left before the December presidential election, the gap between the ruling party’s Park Geun-hye and liberal darling Ahn Cheol-soo has narrowed, a poll by the JoongAng Ilbo found.

The survey also showed that more respondents believe the claims from Ahn’s lawyer that the Saenuri Party issued blackmail threats to bar him from joining the race. 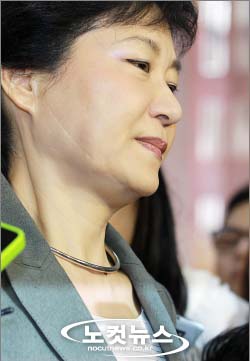 A total of 1,500 eligible voters were surveyed on Friday and Saturday through a random phone poll.

Park was leading Ahn with 50.4 percent to 45.9 percent under the assumption that the December presidential race will only have the two candidates.

Even though Park was in front, the gap shrank from the last poll by the JoongAng Ilbo at the end of August. That survey, conducted between Aug. 29 and 31, had Park at 52.7 percent and Ahn at 43.2 percent.

On the claims over the Saenuri Party’s blackmail threat, 40.2 percent of respondents said they believe Ahn’s argument that the ruling party threatened him, telling him not to run in the race.

On Thursday, Keum Tae-sup, a legal adviser to the software mogul-turned-academic who may run for president in December, told a press conference that a member of Park’s campaign team, Jeong June-guil, had earlier phoned and threatened to reveal dirty secrets about Ahn if he declared candidacy for president.

Another 26.9 percentile sympathized with the Saenuri Party’s position that it was nothing more than a chat between close friends and the alleged blackmailer is not in a position to threaten him.

The remaining 32.9 percent of respondents refused to answer the question or had no idea on the matter.

Although it’s about three months away from the election, the largest opposition Democratic United Party hasn’t chosen its candidate to run against Park. The candidate registration for the presidential election must be made on Nov. 25 and 26.

The DUP will elect its runner no later than Sept. 23 and Moon Jae-in, former chief of staff of late President Roh Moo-hyun, is currently leading the primary.

When asked in the latest poll which candidate they would choose among the three potential runners - Park, Ahn and Moon, Park led the poll with 47.7 percent. Ahn came in second with 33 percent and Moon last with 16.9 percent.