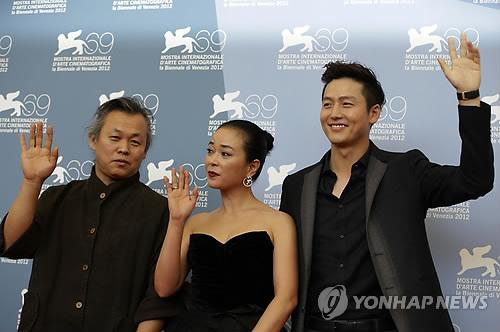 This is the first time that a Korean film has won a top prize from any of the world's three largest film festivals -- Venice, Cannes and Berlin.

Kim delighted the audience at the awards ceremony by singing the traditional Korean folk song "Arirang" on stage to thank the jury, according to foreign press reports.

"I express my endless thanks to all actors, actresses and staff who took part in this movie," the 51-year-old director was quoted as saying. "I also would like to honor all of you who chose 'Pieta' at this film festival." 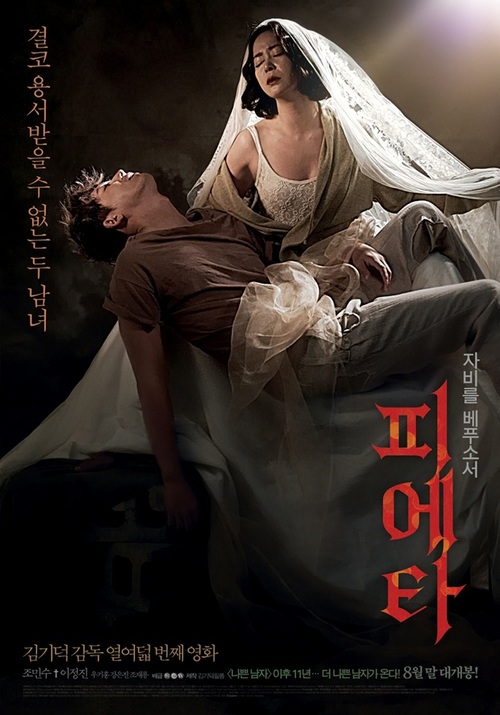 Jo Min-su, the film's lead actress who was on stage together with the director, said as tears of joy streamed out of her eyes that she is more happy because it is the first time that the Golden Lion award goes to a Korean film.

The movie is about a ruthless young debt collector who gradually changes after a mysterious woman who claims to be his long-lost mother visited him, apologizing for abandoning him at birth. But the woman suddenly disappears and the man is confronted with an enormous secret.

The film, whose title was inspired by Michelangelo's masterpiece sculpture "Pieta," is Kim's 18th in total since debuting in 1996 with "Crocodile."

Kim won prizes at Venice and Berlin for "3-Iron" and "Samaritan Girl" both in 2004. He is also known for his 2003 film, "Spring, Summer, Fall, Winter... and Spring," which depicted the life of a Buddhist monk and his young protege while encapsulating features of Buddhist philosophy.

During the Venice festival, the Silver Lion for best director went to Paul Thomas Anderson for "The Master." The film also earned him a joint best actor award for Joaquin Phoenix and Philip Seymour Hoffman.

The best actress award went to Israeli actress Hadas Yaron for her role in Rama Burshtein's "Fill the Void." [Yonhap]