Suicide a growing trend in elderly

Suicide a growing trend in elderly 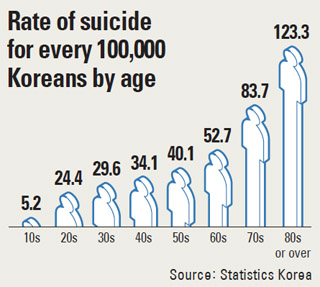 Last Thursday, a 67-year-old patient surnamed Kim was laying on a sickbed, slowly waiting to die. He was in the emergency room at the Soonchunhyang University Hospital in Cheonan, South Chungcheong, last month, after drinking a bottle of Gramoxone, a poisonous herbicide.

For 20 years, Kim had considered divorcing his wife because of the frequent fights they had, but his children pleaded for them to stay together.

After drinking some alcohol out of stress, Kim broke down and drank 50 milliliters (1.69 ounces) of poison. Immediately after he drank the herbicide, he told his family he had no regrets, but, last week, he admitted to his doctor that he was afraid of death.

Although today marks the 10th World Suicide Prevention Day designated by the World Health Organization, Korea still ranks as the country with the highest suicide rate among the Organization for Economic Cooperation and Development (OECD) countries since 2004. 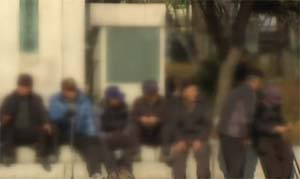 There are a growing number of elderly Koreans above the age of 65 committing suicide. Of the 15,566 suicides that happened in 2010, 4,378 suicides, or 28.1 percent, were committed by the elderly.

The suicide rate is even higher in rural areas, mainly among farmers. According to Statistics Korea, in Seoul, 65.1 elderly Koreans above the age of 65 committed suicide in every 100,000, but the number was almost double in the South Chungcheong region with 123.2.

Of the 500 herbicide-poisoned patients the Soonchunhyang University Hospital in South Chungcheong treats every year, a majority of them are those who drank the chemical as a means to commit suicide.

“For the past 29 years, I’ve treated some 10,000 poisoned patients and have witnessed 5,000 deaths,” said Hong Sei-yong, the university’s professor of nephrology.

“People say that suicides by the elderly are done intentionally but based on my experience treating patients, the decision is made abruptly and they all regret the choice afterwards.”

In 2007, in a village in South Chungcheong with around 50 to 60 families, five elderly residents committed suicide in one week. Over the past 10 years, more than 10 elderly village people killed themselves and, because of this, the village was on the verge of collapse.

In 2006, a 78-year-old villager surnamed Lee drank poison after having a verbal fight with his family and residents over land. In 2010, an 80-year-old surnamed Kim also swallowed herbicide after feeling pessimistic about her life as she had severed contact with her family members.

According to government reports and analysis, old people in rural areas choose to commit suicide following similar scenarios by drinking herbicide out of despair.

Statistics Korea said in its 2010 report that 81.6 percent of suicide committed by the country’s elderly is due to social isolation arising from economic poverty, physical illness or family discord.

Experts note that although rural areas have aged rapidly due to industrialization, progress in the improvement of the social system that supports them is still slow.

“Old residents in rural areas are not well aware of how they’re able to receive government support even though they suffer from physical illness or economic deprivation,” said Park Ji-young, social welfare professor at Sangji University.

A lack of government control over the use of poisonous herbicides is also being blamed for the high suicide rate in rural areas.

According to Statistics Korea, 56 percent of Koreans above 65 that committed suicide in 2010 drank herbicide. In the rural areas, the percentage is even higher at 80 percent.

Starting November, the government said it will ban all production of Gramoxone, but it isn’t difficult to find it in the village areas in Korea.

“Rural households have already purchased Gramoxone in advance after being informed that they will no longer be able to buy it starting in November,” said Kim Do-yoon, an official from the Chungcheongnamdo Mental Health Center.